When Parker was born his biliruben was high, so we had to keep him under therapy lights for jaundice. I noticed he wasn't acting right so I took him to see the doctor. The doctors kept blaming him being lethargic, not eating, etc for being dehydrated because he was under the lights. As the days went on we noticed he was losing weight, his eyes were “sun setting“ & he was EXTREMELY lethargic. You could pick Parker up & he was completely limp, almost lifeless, it seemed like. I kept taking him to the ER's & doctors, all for his symptoms to be blamed on the lights. Then I started noticing at about a week old his head getting larger. I had taken all I could take with the ignorant doctors. They wouldn't listen to me!! I kept being told I was a first time, over-reactive mom & that he was fine. So I had my aunt call his doctors office demanding they see him as soon as possible & find out what was wrong with him. This was a Friday & they couldn't get him in until Saturday morning. We went & seen the doctor on call & as the nurse was checking vital signs & asking what my concerns were, I told her & I will never forget what she told me. She was rubbing Parker's head & in baby talk said, "Aw tell momma I'm newborn, I'm not supposed to be very active.” Mind you, he has a twin who I compared him to. We go in to see the doctor & express our concerns. The doctor didn’t see a problem with any of our concerns, even though Parker weighed 6.3 lbs at birth & weighed 4.11 lbs that day, but would order a CT scan against his better judgment. He said no news was good news. 2 hours later we got the phone call.

He said they did find fluid & have contacted the Childrens OU Neurosurgy in OKC, OK, they should call me first thing Monday morning to schedule an appointment & that they will probably want to see us in the early part of the week. Monday comes, no call. Tuesday comes, no call. So, I call them. OU has no clue what I'm talking about, they haven't spoken to his doctor & what referral was I talking about? I call his pedi & of course they have spoken to OU. I call my dad & told him what's going on. He gets on the phone & put a fire under their butts & got them on the ball. They called Wednesday & scheduled him an appointment for that Friday. We went, the doctor reviewed the CT Scan & immediately admitted him to the hospital & put him on the "work in list" for surgery. He had surgery the next morning. He came out of surgery a completely different baby. His eyes could focus, they weren’t sun setting, he could look at me, he could eat (without throwing up). I was told everything went well & they had drained about 30 ml's, if I'm not mistaken. 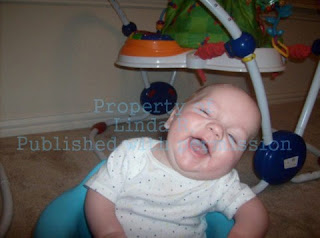 This was the hardest time in my life, EVER. I can't tell you the pain I felt knowing my baby was practically dying & no one, NO ONE would help me. When you're a momma you just know when something isn't right & it wasn't. I remember holding him & just sobbing when he was sick. Also when I first noticed his head was getting bigger & "funny looking," I was holding him at my grandpas house & I asked my grandpa, "Doesn't Parkers head look like your daughters head when she was born?" (his daughter had Hydro at birth, she passed away. He is my mothers adopted father, no blood relation.) He assured me that he didn't think so & that if Parker had it, his head would be bigger. His daughters head was the size a cantaloupe at birth, I had seen pictures. :(

One night we sat in the ER for 10 hours, over-night. They tried to give him an IV because I told them he had only ate 2 oz that whole day & threw half of that up. They had the ER doctor, ER nurse, 2 nurses from the nursery came, all to try an give him an IV & they all failed. They said he was too dehydrated to get a vein & we got sent home with pedialite. I should have fought harder for him & I kick myself for it all the time but we were so exhausted. Staying up all night with 2 newborns in the ER is very trying & honestly I didn't think they would help us, they wouldn't. No one would. They kept saying I was over reacting, he was fine. Also when we he had his shunt surgery they had a hard time getting a vein too. If I remember correctly, the floor nurse tried 9 times, 2 nurses from the NICU tried twice each, a doctor on call tried once & finally the next morning the anesthesiologist got it.

Another thing that keeps me puzzled, when we met with the Neurosurgeon she told us the ultrasound tech should have found the Hydro while I was pregnant & they could have done surgery on him at birth. Funny since how I had probably 10 ultrasounds or more & several were by specialist in Dallas, Fort Worth & OKC (routine for twin pregnancies, since most multiple pregnancies are high risk).

It's been almost two years since his shunt placement surgery & Parker is doing wonderfully. No revisions, no complications, nothing. He is developmentally on target & is reaching all his expected milestones. We know how incredibly blessed we are. We pray that each day is as best as the last for Parker. 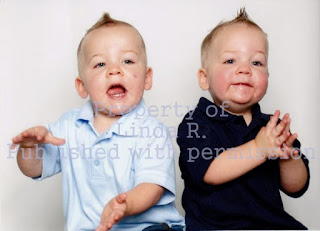 This is the link to the Hydrocephalus walk, and they're looking for donations. If you have a few bucks to spare, I'm sure they'd appreciate any amount, no matter how small...every dollar counts.http://www.active.com/donate/txbootscootdallas/roddy

Special thanks to Linda for sharing the story of your gorgeous little boy, Parker.  I am sure that other parents in this situation will find some comfort in knowing how well everything has worked out for all of you.  Your sons are a blessing, and I thank you for letting me have a little glimpse into your lives.
Posted by ChewyMomma at 3:54 PM