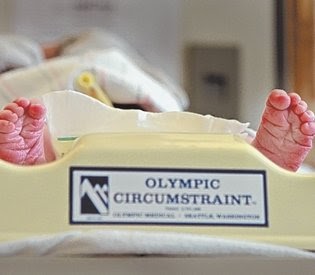 You know, before I became an intactivist a parent, I used to see babies and just oogle over them.  Oh, I'm telling you, the sweet face of a newborn baby was just enough to bring me to tears.  I just thought they were the most amazing creatures that have ever been created.  Well, I still feel that way when I see them, only now...now I cringe when I see a baby boy.  And I hate it.

I hate looking at these precious babies and worrying about whether or not their parents were educated before they brought their son home.  I hate worrying that the little angel in front of me was strapped down to a circumstraint board and had his genitals torn and clamped and cut off of him while his screams for help were ignored.
I hate knowing that at least where I come from, only about 50-60% of baby boys make it home with all of their parts.  I hate knowing that even when their parents are told the truth, they are so often more worried about proving their son will be "just fine", and worry more about their own false opinions (like he "should look like daddy") than they do the FACTS.  They argue with me about truths...though their "truths" are far from fact.  They are generations of mis-information.  And their son pays the price for their inability to put HIS needs before their own. 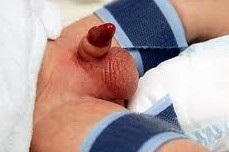 The truth is that baby boys with an intact penis will grow up to have better sex than any of their cut peers.

The truth is that cutting a piece off of your child's penis doesn't somehow give it super powers.  It doesn't prevent STDs or HIV.  Only abstinence or condoms can do that.


The truth is that a father and son share DNA.  They don't need matching penises to be father and son, and a REAL man will want his son to have something he never had the chance to have.  And he'll protect him, not force the same fate on his precious baby boy.

I hate knowing that even after they've done it to one son, so many people still defend what was very clearly the wrong choice.  I hate knowing that they ignored that instinct to protect their infant, and I know we all have it!  I hate that someone let them do it in the first place, and then to allow it to happen again...makes me sick to my stomach.

I understand all too well that our first children are kind of guinea pigs for the rest to follow.  We do our best with them, but have very limited amounts of experience.  That lack of experience leads us to do things that later on, after more children, we look back on and think "what the hell was I doing?!"

I also understand that sometimes people don't even THINK to look into circumcision, and when they do, it's very common to just ask other people they know that have boys what they did.  And if the people they asked about it had a son who was cut, chances are if they never looked into it further, theirs will be too.  Because we all think that someone with a child older than ours will know better than we do.  Sadly, that's not often the case.

I try to hope for the best...hope that every little boy I see has been saved...that someone took the time to put themselves out there and tell their parents the truth.  I hope that the fear of being told to mind their own business wasn't so scary that someone who knew the facts failed to speak up.  I hope that the little guy has been given the opportunity to live his life with every part of his genitals, that he might go on to then protect HIS children, and his grandchildren. 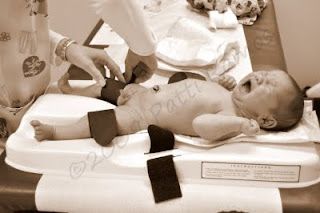 If it wasn't for hope, I'd have to stop looking at babies altogether.  Because the thought of those little wonders being strapped down and mutilated...it's just too much for me.
Posted by ChewyMomma at 1:35 PM