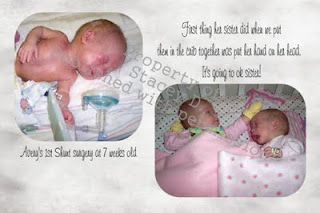 Our hydrocephalus story began when I was 18 weeks pregnant. We were seeing a specialist since I was pregnant with twins and was considered high risk. We were going in for our appointment to find out the sex of the babies. We were told we were having girls and that baby B had hydrocephalus. The doctor explained that she was unable to drain the brain fluid on her own and would require a shunt, she may be severe to "normal". He told us we needed to understand that she may never walk or talk (and he would remind us this over and over during my pregnancy) and then asked us if we wanted to abort her and keep her sister. That was not an option for us. She is our child and we love and will care for her no matter what.
The girls arrived 2 months early, on Valentines day. Baby B (beautiful Avery) was seen by a neurosurgeon as soon as she was born. She didn't require surgery right away. When I went in for my 6 week appointment I so wanted to prove that doctor wrong, that she was going to be just fine. She hadn't required surgery yet. I showed the girls off so proudly, as any mother would. I received a call from the neurosurgeon the next week letting me know it was time for her shunt to be placed.

The next morning my husband stayed home with our other daughter, while I took our little one to the hospital for surgery. I was surprised that the surgery is actually pretty quick and so is recovery. Don't get me wrong it is heart wrenching to see your child in that condition but I was so thankful for our neurosurgeon and the help she was giving us. In the waiting room I met another family who had their 2 year old son in for a revision. It was nice to talk to a family who had been down the path we were about to walk down ourselves.

I have had people tell me lots for false information...assuming I don't know much about hydrocephalus. One that stands out is "Don't worry it is really common for babies and it will pass in a couple of months." I let her know the facts. No it wont. This is something she will have for her whole life. Yes we got lots of stared after her surgery, lots of moments etc. But she was doing well and that is all that mattered.

At 3 months old she had fluid building up around her shunt. Our neurosurgeon was out of town so we were left in the care of another doctor. We spent 3 days in the hospital for observation. They tapped her shunt and were testing it for bacteria. They kept her on a do not eat diet in case they needed to run her into surgery. She was born at 3 lbs 14 oz and hadn't gained much weight because of her GERD. So to not eat for 3 days was torture for both of us. They ended up putting a bandage over the shunt to redirect the fluid down the shunt. 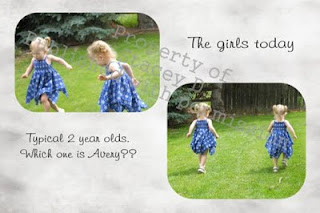 Then at 4 months old she had to have surgery for GERD and hernias. Two weeks later her first shunt failure. I called the doctor because I knew something wasn't right. The doctor ordered an ultrasound to be done (they can do the ultrasound when the soft spot it still open) The tech came back and told us she had a lot less fluid, she was fine and we could go home. By the time we got to the parking garage the neurosurgeon was calling us saying she would see us at 5 am for surgery. The person reading the scans was comparing it to when she was first born and not after she had her shunt placed. Talk about a roller coaster of emotions in a short time span.This time I sat crying in her hospital room holding her frail body thinking this is the life I chose for you. For a moment I wondered if we made the right decision.

Three weeks after that her second shunt failure. This time they moved the location of the shunt. This time I could not handle the hospital etc by myself. They let my husband and other daughter stay in the room with us, thankfully. This time her head swelled up sooo much it was so scary but we were told that was normal considering that the shunt was relocated.

After Avery's nissen for her GERD she was not supposed to be able to throw up. One afternoon she was extremely cranky. So I changed her, tried to feed her (which she wasn't hungry) and I put her down for a nap. She woke up screaming 20 min later. I changed her and she fell asleep once again. So I put her back down. 20 minutes later she was screaming again. I picked her up and she threw up all over me and then went right back to sleep. This sounds like a typical shunt failure. So I rushed her to our pediatrician since they were down the street. They were in contact with our neuro and the decided together that I should get to the hospital. It was after hours so they told us to go to the ER. We were there for 5 hours. They did a shunt series of x-rays and and CT scan. Our neuro was actually in the building doing an emergency surgery. The ER doc came in and said well there is a LOT of fluid on the outside of the brain. I had to explain to him that hydrocephalus was fluid on the inside of the brain. "Oh well I am not a neurologist so I will just wait for your doctor to look at the scans" It ended up being the flu and not her shunt. The ER doctor was kind enough to give us his 2 cents on the way out "By the way you don't want to subject your child to unnecessary x-rays or scans...you are just going to give her brain cancer in the future." Wow really?!?! OR we could give her brain damage if not caught soon enough or she could die if we ignored a shunt failure!! I tossed and turned all night wondering if we did the right thing. Our nuero called the next day and wanted to see her as a follow up. She reassured us we did the right thing. The symptoms were very typical of a failure. What a nightmare to say the least.

Previously, I knew she was having a shunt failure because her soft spot was raised. My fear once her fontanel closed was that my source was now gone and she couldn't tell me what she was feeling. She still can't talk in paragraphs but she can at least tell me what hurts. But that time between was very scary. We take every day at a time.

At 16 months she started walking. She is now 2 1/2. We have had shunt failure scares since then. Unfortunately a shunt failure is much like sickness. As weird as it sounds, you pray for a fever or diarrhea because then you know it isn't a shunt failure. A scare or revision is always a smack of reality. You are going along life as usually and then you realize a failure can happen any time. That she could need another brain surgery and how will she do with another one. She is talking up a storm. She is the happiest child and you would never know she has hydrocephalus without me telling you. We are thankful for her every day. Life wouldn't be the same without her. Granted we never know what tomorrow will bring...but then again we can say the same for all of us.

A shunt is not a cure!


Stacey also gave me permission to share a story she told me about an incident in the hospital when she was alone with both of her sweet girls, when Avery was having a shunt failure.  I'm adding this to the blog post because I think people need to be aware of their words.  It's very easy to hurt someone when you don't know the situation surrounding the events you think you're seeing.
"I had both girls with me because [my husband] was at work.  The neurosurgeon said yes it is a failure.  She will have to be in surgery today so run over and get blood work done.  The tech yelled at me for bringing children into the area where the blood work is taken BUT she is the one needing the blood taken.  Then while waiting for [my husband] to get there, I was feeding [our other daughter] and Avery was crying but she couldn't eat before surgery.  I had people walking up to me "sounds like it is lunch time" and "I think you need to feed that one too."  These statements might not seem like much but when you are under stress knowing your child needs to have another brain surgery...I cried.
In 5 1/2 mo of her life she had 6 hospital stays and 4 surgeries.  Avery was in the hospital so much that the nurses knew us.  The food service folks knew who I was when I called down for food and they stopped accepting payment."
Thank you so much Stacey, for sharing your story.  Your girls are just beautiful, and you are a fantastic mother.  They are just as blessed to have you for their momma as you are to have them as your girls.
**I also want to give you a special thank you for all of your support when we were unsure of our own son's future, when they thought he had Hydrocephlus. You were my voice of reason. I'll love you forever for that. xoxo
Posted by ChewyMomma at 9:21 AM