How To Sew A Cloth Diaper

So, I scooped this video from HERE, but didn't follow it exactly.  Note to self: watch the whole video at least twice before attempting to make a cloth diaper.  I'll tell ya, trying to go by memory when you've never done something before...it makes for a very...trying...experience.  I told my husband that my cloth diapers wouldn't be made with love.  They'd be made with curse words.  Hahaha!  It was amazing how much easier it was when I watched the video a second time, and then played it through a third time, stopping it every so often so I could follow along.
I'm not exactly what you'd call a computer whiz. It's right up there with my sewing skills on my list of talents. (Yeah right!) So I couldn't figure out how to download the pattern. I was stuck making my own by tracing one of the baby's diapers.

I realized during this experiment that the most I've ever used the sewing machine for was to make myself some of those really puffy hair scrunchies when I was in high school. (HEY, they were cool then!! Right?!)  I also made a home made lunch bag once in home ec., but that was in grade 7...about a million years ago. 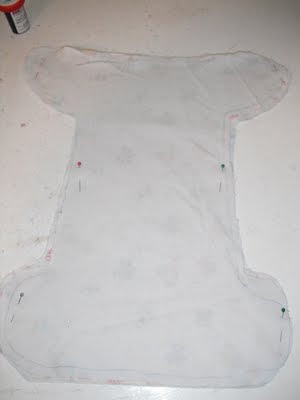 Like I said, I didn't use a pattern to make this. I just traced around one of the disposable diapers we have for the baby, and cut a little bit farther out to allow for the seam.  I pinned it, and sewed the top (like you'll see in the video).

At this point I messed it up... 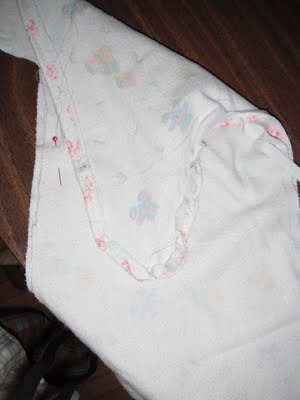 I folded it over and sewed all the way around it, careful not to sew the pocket on the top shut.
I watched the video again at this point and realized I wasn't supposed to fold it before I sewed it, so I had to pull all the stitching out.  Afterwards, I sewed it properly, LOL, and put on the elastic around the legs.  It's not actually as hard as she made it sound in the video. 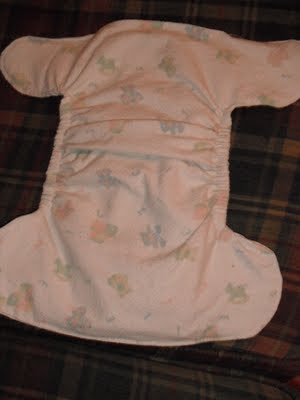 This is the inside of the diaper when it was finished.  I used half of one of the receiving blankets we had from the twins.  We only really need about 4 of them right now, just to use for rolls in our daughter's car seat...so that means we have a stack of flannel receiving blankets that will soon become diapers! 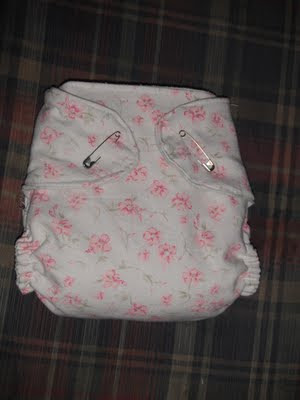 All done!  Now, I don't have any velcro here, so these are going to be pinned right now, which is fine until I can get to the dollar store.  (I won't be using the pins in the photo because they're not baby-safe, but I don't have any of those here either.  I just wanted to show what it would look like when it was finished.

It's not going to win any awards, that's for sure.  But it's not bad for my first time!!

And I thought it was going to be just a little too small for the baby, but I think if I make some different inserts for it, it'll fit.  I made another one today that is a little more fancy (look at me getting all fancy over here, LOL!), and it's the same size and fits her just fine.


Velcro is definitely the answer to a squirmy baby, though.  I thought the reason people didn't use pins anymore was just for the safety issues.  LOL  Nope.  It's ALSO because a baby trying to squirm away while you're trying to stick a diaper on them is like trying to dress a cat.  And believe me, I know how hard that is.  I've dressed a cat or two in my lifetime.
Posted by ChewyMomma at 5:56 PM