Maybe that's not why other people homeschool.  I don't know.  Maybe people homeschool because they don't vaccinate and their kids can't go unless they are up to date on vaccinations.  Here, in Canada, it's illegal to deny a child an education based on vaccination status.  They have the right to an education.  No matter what.  I'm not worried about my un-vaxxed kids being at school...they will remain that way.

I know some people homeschool because they want their child taught according to their religious beliefs.  They want their child brought up learning their views, without outside influence.  And that's just so great for them.  But I'm also not worried about that.  I'm United, and it's pretty lenient on...well, pretty much everything.  I was raised United, and was openly allowed to question what I was told, and to look at other religions to see what I thought.  After many years of not going to church, I've taken my own children to a United church in our city a few times.  I'm not worried that they will grow up not understanding our religious beliefs.

I'm sure that some people also homeschool because they have special-needs children and refuse to drug them.  And I understand that completely.  I have never had my children tested for having Sensory Processing Disorder, but have taken a few online tests, and the twins both have areas that they hit every single one of the items on the list.  I know they have it.  And truthfully, if either of my children ever have an issue in school that results in a teacher (or the school board) recommend I drug them in ANY way, I'd pull my kids from school in a heartbeat.  They can kiss my ass.  No way.  If I can manage to peacefully parent three children, two of whom have SPD and KNOW they don't need to be drugged, there's no person on this planet that would convince me of that.
Still, that's not the reason I want them here.

I'm sure that being in a mainstream school will be good for them socially...meaning I know they'll get time to play with other children.  I don't have any disillusionment when it comes to knowing the difference between "playing with other children", and "social skills".  I know they get "social skills" every single day, from interacting with the people around them...with me, with my husband, with each other...

I'm sure they'll get to have a lot of fun doing things like painting, or going on school trips.  But they paint here. At home.  And we take trips to places all the time.  We have the most fun with them when we take them out.  And the idea of them going on a trip without me...UGH!  I'm terrified. 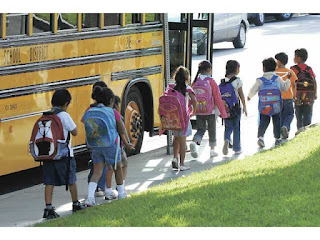 I don't know if every parent goes through this before their kids start school.  I'm sure not everyone does.  I know that there are more than a few parents that look forward to their children being out of the house so they can have "me time".

Maybe these are the words of a "new mom"...even though they are 3 1/2, I have very little experience.  I'm going on what I know, what I've learned, and instinct.  And I know my instinct says to keep them at home.

And I don't want to throw my husband under the bus here...but...it really is him that is making all of this happen.  It's him who wants them in school.  It's him who has INSISTED that they go.  And it's very clear that the only way that they're staying home is if I was to divorce my husband.  He is that serious.  He is not going to give in.  And it kills me to give in on this.  But I have to think that my children having both of their parents under one roof is more important than my COMPLETE AND OVERWHELMING TERROR of them going to school.  I have to put their needs before my own...even when it makes my heart hurt.  Because my husband is ultimately a good man.  He just thinks about things differently than I do...and he HAS given in on a lot of things that he really felt strongly about because I was willing to divorce HIM to protect my children;
He wanted them vaccinated and I said no.  I told him that if I had to, I'd leave and take the kids to keep them safe.  I had to protect them...no matter what.
He wanted my son circumcised, and I said no.  I told him that I'd either A) kill him, or B) divorce him, if he had our boy circumcised against my wishes.
He wanted me to use the hormone cream on Baby Girl's labial adhesion because "the Dr. wouldn't give it to her if she didn't need it", and I refused...and it fixed itself!
He wanted Ooie's ears pierced.  I said no way.  She has no piercings.
He wanted the baby in a crib.  I said no.  She's 14 months...sleeping in our bed.  Shes never slept in a crib.
He told me to wean our son at a year old.  At 22 months I weaned him because of a high-risk pregnancy.

He's a fantastic PERSON and always means well, but he has never done a single second of research.  For that reason I feel like I should get to make the major decisions...I'm the one with the facts, right?!  If he did some research and found something different than I did, I'd have to consider his opinion on these things valid.  But he hasn't.

He doesn't get it.  He thinks I'm being crazy.  He thinks my research has made me nuts.  And maybe it has.  Maybe I know too much.  Maybe I'm to the point that learning has made my life something I take too seriously.  But how can I get past the fact that I feel like I'm giving in on a major thing...something that could ultimately change them forever?!  I want them to stay the children I've raised them to be.  I don't think that's too much to ask for!!!

I need to go and eat some chocolate.  I only have seven months left with my children staying home everyday.  The idea of that is just too much for me right now.  : (