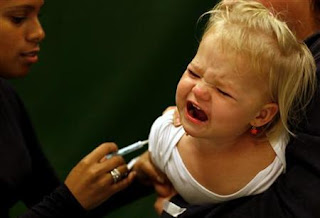 Yes, I post links on my personal Facebook wall about vaccinations.  Sometimes my pro-vax friends get a little crabby cranky snippy pissy about them because I have FACTS, and those don't line up well with their opinion.  Can I sleep at night knowing that?  You're damned right I can!
I don't post links to argue.  There's nothing TO argue.  Facts are facts.  Opinions are opinions.
The fact is that I have been researching vaccinations for 3 years (this month).  I know more about vaccines than any sane person needs to know.  I didn't even MEAN to find out half of what I know.  I wanted nothing more than to see that vaccines were, (against my instincts), safe.  My intentions of researching them was to prove to myself that I was just being an over-cautious, super-paranoid new mom.  But I didn't.  What I did was find out that when push came to shove, having my children shot up with countless chemicals wasn't for me.  Or for them.  And if by speaking out from time to time, I can have people actually stop and do some stinkin' research, then I've done my job.
I would never tell someone to just STOP vaccinating...but I would say WAIT, and do some research first.  If you want to vaccinate after doing REAL research, you can always go in and do it.  Nothing is set in stone, as the nurse at our Dr.'s office says, but you can NOT un-vaccinate.  Once its done, its done.
My top favorite places to go for information are:
Proud Parents of Un-Vaccinated Children on Facebook.
Dr. Tenpenny on Vaccines
Vaccine Truth.org
National Vaccine Information Centre
Vaccine Risk Awareness Network
And as crazy as it may seem...the CDC website is fantastic for information.  (Why they post information that shows how ineffective and pointless vaccines are, I'll never know!)


For example...look at THIS (in regards to Polio):

"Polio is an infectious disease caused by a virus that lives in the throat and intestinal tract. It is most often spread through person-to-person contact with the stool of an infected person and may also be spread through oral/nasal secretions. Polio used to be very common in the United States and caused severe illness in thousands of people each year before polio vaccine was introduced in 1955. Most people infected with the polio virus have no symptoms; however, for the less than 1% who develop paralysis it may result in permanent disability and even death.
And THIS:

"...Less than 1% of polio cases result in paralysis of the limbs (usually the legs). Of those cases resulting in paralysis, 5-10% of the patients die when the respiratory muscles are paralyzed. The risk of paralysis increases with age."
I admit fully that I suck at math...so I've asked a math friend (thank you Katy!) to do the numbers for me.  According to what's written on the CDC's own website, here it is, broken down.
MOST PEOPLE infected with Polio show NO SYMPTOMS.
LESS THAN 1% of Polio cases result in paralysis of limbs.  (Lets say that means .98%)
Only 5-10% of THAT .98% will die...meaning 0.049% - 0.098%.
In other words, 49-one-thousandths of a percent, and 98-one-thousandths of a percent will die.
WOW...good thing they made that vaccine, eh?  DERP (And I don't mean "Derp" as in "you vaccinate so you're an ass", I mean "The polio vaccine does pretty much nothing, and it's useless."  So just in case someone wants to get all upset and butthurt over that, just don't.  It wasn't an insult to YOU.)
I have a suggestion for those afraid to get Polio here...in the Western Hemisphere.  When you crap, wash your hands.  And when you change a baby's diaper, wash your hands.  (Just sayin'.)  There hasn't been a case of polio in the Western hemisphere since 1979.  Don't even ask me why we still vaccinate against it.  If you do, I'll probably start ranting about money being more important than lives, and all of us only being a number.  (Moving on...)
For those who travel abroad, and you see food being cooked on the side of the road, just a foot from the hole they dug as a crapper...don't eat there.  Seems like common sense but it's not...
(FTR, I JUST watched a special where a guy was trying "native cuisine" and ate food being cooked LITERALLY a foot from their crap hole...which he said was not uncommon.  It didn't stop him from eating that food either...  yum.)
Gag.  If you're a grown adult travelling somewhere that Polio thrives, research.  I'd be lying if I said I thought vaccinating yourself in THAT situation was stupid, because it might be a good idea.  (Or it might not.  Who knows.  I'm not planning any trips to a 3rd world country...EVER...so I haven't looked into it.  Do some research, though, before you get the jab.)
Polio is the example I used here because I saw that information about 6 months ago and figured this is a good way to keep it documented, and because all my pro-vaxxing friends site Polio as the disease that would have killed us all if they hadn't made a vaccine for it.
So the whole point of this post is to say that I don't give a flying monkey's butt if someone on my friends list gets mad that I've posted information about vaccines being dangerous.


She did not do "extensive" research.  I'm calling bullshit.  She looked online for an hour and then stopped. We've had this conversation before...two years ago when she posted a very similar comment on my wall.


It's funny that someone who vaccinated her own (preemie) daughter out of fear from that one event 6 years ago (which I DOUBT, since in the 3 1/2 years I've known her, this is the first time I've ever heard of it...and it seemed to be her go-to reason for vaccinating), didn't take the time to find out what strain of measles he had...or if he had any other health issues at the time...and couldn't elaborate on exactly what those "life changing side effects" were...  But she can tell you that it "could have been prevented with vaccination."  I think that's pretty amazing.  Good job Doctor!  (Oh wait.  She's a grade 4 teacher...not a Doctor...hmmm...)

Some good parents make some poor choices, some poor parents luck out and make some good choices, and sometimes people who really believe they're making great choices find out later that infact, the choices they made were not so shit hot after all.


As I said to that friend (right before she un-friended me), some of my favorite people in life are pro-vax.  I don't hate people for vaccinating!  I hate when people BLINDLY vaccinate without ever doing a second of research.  I hate when people sit back and assume their Dr. is going to tell them what's in the vaccines, give them sites to do some research, and treat their child as though they're more than a number...or a pay cheque.  Because they just AREN'T.

I asked my own Dr. why it's important to vaccinate.  He told me that it's because of "herd immunity".  He said that if children don't get vaccinated, it lowers the "herd immunity", and suddenly children start getting diseases that "could be prevented with vaccination."  He never once said that any of the diseases he was talking about were CHILDHOOD ILLNESSES, or that those diseases were SAFE to get in childhood.  He told me that "adverse effects don't happen".  I'm serious.  I told him that I know they do...I've looked at the VAERS website.  Then he told me that my kids would "get polio if [we] go to a 3rd world country."  Um....whaaaaat?  Who's going there??  Not us!

Anyway, I just wanted to put it out there that sometimes I post information that pisses off my friends.  I can live with that.  I don't post information to cast judgement on them for vaccinating their kids, I post it to make them question what they've been told.  If they research and still come to the same conclusion, whatever.  I can live with that too.  But too many times I've had friends say straight out that they have NEVER researched vaccines, and their kids are fully vaccinated...as though they're proud of it.  And THAT disturbs me.