This frosting is awesome. It's perfect for anyone on a vegan or dairy-free diet. I used this recipe for the icing on the dairy-free cupcakes I made for my twins' third birthday party. We were having three children at the party who are lactose-intolerant, so I needed something that would be okay for them, but still taste like "normal" frosting for all of the other children who didn't have the intolerance. 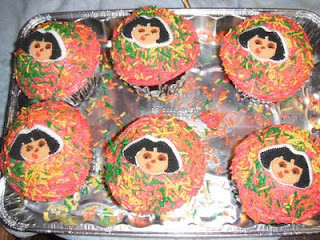 To make the cupcakes in the picture, I used Duncan Hines dark chocolate fudge cake mix, and poured the batter into an extra large muffin tin. The mix made about 8 extra large lactose-free (and vegan!) cupcakes. I did line them with extra large paper cups...just white, because I didn't want to take away from the top of the cupcakes. (This is hard work for me! LOL!)

After making the frosting, I added the food colouring and put it in the fridge over night. In the morning before I frosted the cupcakes, I set it out so it would warm up enough to mix with the electric mixer again. I think I left it out too long because it was too smooth when I frosted them, but oh well. They still looked pretty good.

To frost them in a spiral, I watched THIS for instruction...and really, it was my inspiration for these!

After icing it, I put orange, green, and yellow sprinkles on top, and pressed a Dora icing face on the very top.

When they were finished, I put them on a tray in the fridge, and before the children went home from the party, I put them in coloured boxes (they look like Chinese food take out boxes) with string handles, and stuck a Dora and Diego sticker on each side. Instead of the typical "loot bag" filled with cheap toys and candy, they each got a cupcake. Who doesn't like a cupcake?!

I don't typically use soy, for a million reasons, but for a rare occassion, I didn't see the harm. I'm sure you could use other non-dairy margarine and lactose-free milk if you aren't vegan. Also, if you don't actually have a lactose intolerance, and you have no need to keep the animal products out of it, you could replace the soy margarine for real margarine, and use regular milk and yogurt.

I promise you, you'll never know there's soy in this!
Posted by ChewyMomma at 3:23 PM