The Effects of Emotional Abuse on Children 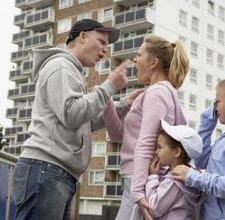 What is the most profound form of child abuse?
Published on January 28, 2011 by Steven Stosny in Anger in the Age of Entitlement

Families do not interact predominantly by language. That might surprise you, until you consider that humans bonded in extended families for millennia before we had language. Even today, the most sensitive communications that can have far-reaching consequences on our lives occur betweenparents and infants through tone of voice, facial expressions, touch, smell, and body posture, not language.

Though less obvious than interactions with young children, most exchanges with older children and between intimate partners also occur within an unconscious process of emotional attunement. Without realizing it, we tune our emotions to the people we love. That's how you can come home in one mood, find your partner or children in a different mood and, bam! - all of a sudden, out of nowhere, you're in their mood. Quite unconsciously, you automatically react to each other.

Emotional attunement, like most emotional processes, is negatively biased. Probably because negative emotions are more important for immediate survival - giving us the instant capability to avoid snakes in the grass and fend off saber tooth tigers - they gained priority processing in the primitivebrain and continue to have undue influence in modern times. To keep from being "brought down" by the other's negative mood, many families attempt to dull their sensitivity to the emotional world of one another. This puts them squarely on the road to dissolution, as it stenches the lifeblood of relationships -- compassion and appreciation -- both of which require openness to attunement. Due to the automatic process of emotional attunement, children are painfully reactive to a walking-on-eggshells atmosphere between parents, even if they never hear them say a harsh word to one another.

Everyone in a walking-on-eggshells family loses some degree of dignity and autonomy. It seems that you become unable to decide your own thoughts, feelings, and behavior, because you are living in a defensive-reactive pattern that runs largely on automatic pilot. In my experience of treating nearly 6,000 family members who walk on eggshells, no fewer than half suffer from clinical anxiety and/or depression.

"Clinical" doesn't mean feeling down or blue or worried; it means that symptoms interfere with normal functioning. They can't sleep, concentrate, or work as efficiently, and can't enjoy themselves without abusing a substance.

Most children in families that walk on eggshells do not feel as good about themselves as other kids. Test this for yourself. Try asking children to describe their peers. If there is emotional abuse between the parents, they are likely to describe peers in superior terms - smarter, better looking, better athletes, or more popular.

The most common symptom of children in families who walk on eggshells is depression. But the signs can fool you; childhood depression often looks different from the weeping, withdrawn, or sullen demeanor of the adult version. Childhood depression can resemble chronic boredom. Children normally have high levels of interest, enjoyment, and excitement. If your child is not interested in the things in which children are normally interested, lacks enthusiasm, and is seldom excited, he or she is probably depressed.

Another common symptom of these children is anxiety, particularly worry about things that children do not normally worry about, like how their parents are going to get through the evening with each other or whether the bills will get paid. Many kids have school problems, show aggressive tendencies, hyperactivity, and either over-emotionality -- anger, excitability, or frequent crying that seem to come out of nowhere -- or the polar opposite: no emotions at all. In the latter condition, they can look like little stone children; you could slice up a puppy in front of them and they wouldn't care. They have turned off all emotion to avoid the pain of walking on eggshells.

Witnessing a parent victimized is often more psychologically damaging to children than injuries from direct child abuse. That has proven true not only in my clinical experience but in my own family as well. I have but the faintest memories of child abuse that are more physically than emotionally based - a small hole in my skull, a knocked-out front tooth, and a couple of dislocated joints. Yet I have vivid recollections of seeing my mother ignored and dismissed as well as demeaned and terrified. Observing a parent abused is the more profound form of child abuse.

********************************
The above information is something that every parent should know. It's too easy to ignore that your spouse/significant other treats you like garbage...because you think it doesn't matter. You think that because they are not HITTING you, that it's okay...it won't emotionally scar your children, and maybe it will show them that you "perserveared" when things weren't good. You may think that what you're doing is "best for the children", staying in an emotionally abusive relationship. Too many people are afraid to be alone, to raise their children alone, or to "put them through" the trauma of a divorce or separation. I hope now you'll see that even when your spouse doesn't put his hands on you, he is hurting not ONLY you, but your children as well. Our children deserve to live their lives feeling safe, secure, happy, free...not feel like the life they have could come crumbling down at any moment if they too don't walk on eggshells.

I believe that people are generally good, and that even the worst people have a potential to become the people they could and should have been all along. However, if staying in a relationship means that you are being hurt (whether emotionally, physically, or sexually), you need to get out of there. You can assess the whole situation better from the outside...when you're safe. Things you may have just lived with, thinking that was okay (or perhaps you were raised this way and felt it was normal), you can recognize as toxic, not only to you, but to those children who depend on you to keep them safe from ALL forms of abuse. Our children will live what they learn...they ARE a product of their environment. We need to let our children grow up in homes where they are allowed to feel the way children deserve to feel, and see their parents being good to one another.

Even if we find it hard to stand up for ourselves, and expect to be treated kindly and lovingly by our spouse, we should be able to do it for our children...and for the adults that they are going to become.
Posted by ChewyMomma at 9:04 AM