Shit That Pisses Me Off...Painting Us All With The Same Brush

So it's going to be Remembrance Day again.  So, as usual, that horrible status is going around Facebook.  I posted it below from a screen shot taken from someone that WAS on my friends list.

FTR, I do NOT agree with this, and the idea that someone would have the balls to not only post this garbage on their own Facebook wall, but to try to toss all Canadians in the same Bigot Boat as they seem to be riding in, is just too much for me.
Soldiers didn't die for white Christians. Soldiers died defending the rights of EVERYONE in this country. If you move here and you are a Canadian citizen (or landed immigrant), you are a Canadian! It pisses me off that someone I've known for so long thinks that HER religion is the only religion that deserves to be respected. She wants to have rights, but wants to strip other people of rights at the same time. Makes no sense to me. And when I tried to explain it to her, she got pissy. Well, she's no longer on my friends list, and it was because I removed her. I had it. The status says "ENOUGH IS ENOUGH", and I said those words right back to her.

I'm not sure what the motivation is when someone posts that shit. Do they want to see who else owns a white hood? Do they want someone to tell them that being a bigot is just fine, that she's right to post that bullshit?

It makes me nuts because Canada was built by immigrants.  Unless you have two Native parents, you are also an immigrant.  (When I told her that, she informed me that she's Canadian because she was born and raised here.  Apparently that is the prerequisite to be a "Canadian".)

I wanted so smash my head on my keyboard.

And THIS was posted on her wall right after.

See how suddenly this is a "free country"?!  Well, free for HER I guess.  But don't you dare believe in something she doesn't believe in, or you're going to have to adapt...change...so she can hear children sing "Oh Canada" in school.  (Which is funny because her kids are grown...I'm not really sure how she's going to hear it one way or another...)  She's "entitled to her opinion", but when I give mine, I'm getting "all crazy".  Fantastic.  Where's the logic?!
I just wanted to speak up and say WE ARE NOT ALL BIGOTS.  So, when you see this status going around for Remembrance Day, just know that it's a very small minority of "Canadians" who share that belief.  The rest of us are SANE, and it pisses us off. 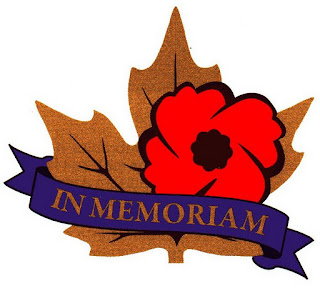 Posted by ChewyMomma at 6:08 PM