What you need to know about Vicks Vapo Rub.

I'm copy and pasting this from CBC.ca.  I've saved a lot of stuff on Pinterest, and this is one of the things I think I need to share.  I came from a generation that had this stuff crammed up my nostrils, and I'm sure some of you lived that too.  Certainly putting it on a child's chest can't be bad, right?
Well, sometimes it is bad...*I want to mention that this article did not specify whether or not it included "Vicks BabyRub".  I would have to imagine that the menthol smell could still do exactly the same thing as the Vaporub, though I don't know for sure. 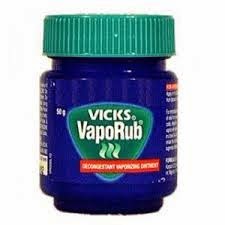 
Parents should not apply Vicks VapoRub, the salve used to relieve symptoms of cough and congestion, to children under the age of two, doctors warn.

Dr. Bruce Rubin, the lead author of a study on the ointment, from the department of pediatrics at Wake Forest University School of Medicine, in Winston Salem, N.C., and his colleagues became interested in the effects of Vicks VapoRub on young children when they cared for an 18-month-old girl who developed severe respiratory distress after the salve was put directly under her nose.

Procter & Gamble's product label warns it is not indicated for children under two. But Rubin said some parents may still choose to use it for a sick child, usually by rubbing the salve on the feet or chest.

"The ingredients in Vicks can be irritants, causing the body to produce more mucus to protect the airway," said Rubin.

"Infants and young children have airways that are much narrower than those of adults, so any increase in mucus or inflammation can narrow them more severely."

In the January issue of the journal Chest, Rubin and his colleagues published the results of tests of the effects of Vicks VapoRub on the respiratory systems of ferrets, laboratory animals with a similar airway anatomy and cellular makeup to humans.

Test tube results showed Vicks VapoRub exposure increased mucus secretion in the animals' airways, whether the tracheas were normal or inflamed to simulate a person with a chest infection.

"Some of the ingredients in Vicks, notably the menthol, trick the brain into thinking that it is easier to breathe by triggering a cold sensation, which is processed as indicating more airflow," he said. "Vicks may make you feel better but it can't help you breathe better."

"This may be of little physiologic consequence in older children and adults, but in infants and small children, this potentially can lead to respiratory distress," the study's authors concluded.
Vicks safe 'when used according to package directions'

Crystal Harrel, a spokesperson for Procter and Gamble in Cincinnati, said complaints are rare and the product is sound.

"Vicks VapoRub has a long-standing history of being safe and effective when used according to package directions. Where marketed, it is in compliance with the applicable health and safety regulations."

Rubin said he recommends never putting Vicks in or under the nose of anyone, regardless of age. Parents should also follow the directions and not use Vicks or similar generic products on children under two, he advised.

The best treatments for congestion are saline (salt water), gentle suction with a rubber bulb, warm drinks or chicken soup, and time, the researchers said, noting if a child is struggling to breathe, then it's a medical emergency.

At his pharmacy in Bay Bulls, N.L., Tom Kennedy said from now on, he'll discuss the product with parents before they make a purchase, adding he won't hesitate to offer them a chicken soup recipe instead.
Posted by ChewyMomma at 9:51 PM