Where Your Milk Comes From 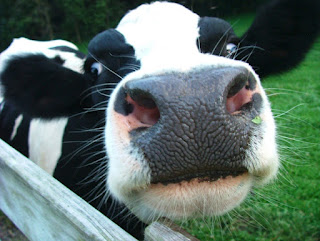 I bet you don't really think about how they're getting the milk you consume, do you?  You probably know that cows are lined up and milked by big machines, the milk is pasteurized, and then packaged and sold in stores.  But there's a lot more to it than that.

Let's start at the beginning.

First thing you need to know;  A cow isn't called a cow until she's had a baby.  Before that, she is referred to as a heifer.  Many of the links provided will say both "cow" and "heifer", and so for those who may not know, they ARE two different things.

Heifers are bred at their first heat, and depending on the breed, that can be anywhere from 9 to 22 months of age, though bovine farmers are encouraged to wait until atleast 15 months old before breeding them.

Once the animals are impregnated, they give birth about 9 months later. (2)

To maintain high milk production, a dairy cow must be bred and produce calves. 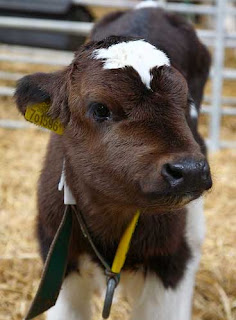 Newborn calves are removed from their mothers quickly, usually within three days, as the mother/calf bond intensifies over time and delayed separation can cause extreme stress on the calf. (3)

A cow's natural lifespan is about 25 years, but cows used by the dairy industry are killed after only four or five years. An industry study reports that by the time they are killed, nearly 40 percent of dairy cows are lame because of the intensive confinement, the filth, and the strain of being almost constantly pregnant and giving milk. Dairy cows' bodies are turned into soup, companion animal food, or low-grade hamburger meat because their bodies are too "spent" to be used for anything else. (4)

"The misery that female cows endure is arguably worse than that of their brothers slaughtered for beef. Dairy facilities are gigantic machine-filled building, more like a factory than a farm. During the milking process, if the machines are not properly maintained, they can send a painful electric shocks though the udder several times a day. These animals are treated harshly, with no room for sensitivity to their comfort or simple needs. All these Mom's are either pregnant or lactating, yet their babies are nowhere to be seen.

Like all mammals, female cows only lactate when pregnant. To maximize milk production, dairy cows are kept pregnant their entire short life. Each year, she will be artificially inseminated on what industry terms a "rape rack" or with the farmer's arm. A cow's natural life span is about 20 years. In this highly intensive farming, however, the stress on her body will diminish her milk output after about 3 years. She is then what the industry terms "dried up." It is more lucrative to send her to slaughter and replace her. Her body will be sold as ground beef.

To insure the highest volume of milk, the calf is taken away from her immediately after birth. Even in seemingly "humane" dairy production, to maintain a profit, cows are sent to slaughter and the calves taken away. This is also to avoid the "mother/calf" bonding. Mother cows have been known to break down the stall in an attempt to find their offspring.

Imagine for a moment being kept pregnant every year of your life, just to have every baby taken away from you and your milk pumped into machines. What happens to these millions of baby cows? A female calf will follow in her mother's hoof-prints, yet she will never know her mother or suckle her milk, being raised on a bottle formula. But what of the males? 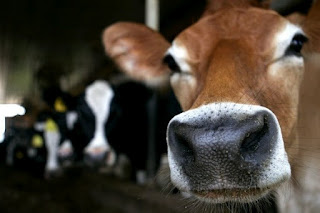 A male calf born to a dairy cow is the wrong breed to profitably be raised for beef. His fate, unfortunately, is much worse. Veal is the soft, pale, anemic flesh of a calf. Veal calves are kept inside in a crate barely bigger than themselves. Chained at the neck, they can't even turn around. They are fed a liquid diet deficient in iron, so their muscles don't develop properly. These babies never see their 1st birthday. Many people recognize the cruelty in raising veal and will not eat it, yet are unaware of the intimate connection between the dairy and veal industries. Supporting one supports the other." (5)

Cows are especially dedicated to their young and the bond formed between a mother and her calf remains long after the baby has grown to adulthood. Separation causes them tremendous stress and agitation. If mother and calf are separated by a fence, the mother will wait for her calf, even through harsh conditions like intense heat or cold weather, hunger and thirst. Cows have even been known to break fences and walk miles to be reunited with calves that were sold at auction. One can imagine the trauma a dairy cow must feel when her calf is taken from her shortly after birth. It’s well known to farmers but rarely discussed that mother cows continue to frantically call and search for their babies for days after the calves have been sold off to veal farms. (6)

WikiHow says this about "weaning" babies from their first-time mother:

" Beware of the likely reaction of the first-calf heifers. They will crawl the fence if you do not make it escape proof with a couple of strands of hot electric wire or steel panels. First-calvers are often so determined to keep their first born forever that they will do literally anything they can to get him back. You cannot let this happen." (7)
The mothers are just trying to get back to their babies! 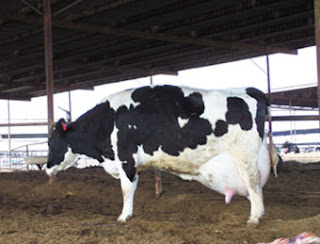 In Canada, dairy cattle are not given sex hormones to increase milk production, so they are fed high-energy food to get them to make the amount of milk that suits the farmer.  This can cause several painful ailments in these cows. (8) 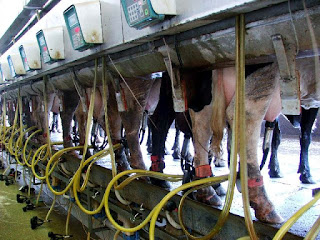 So, my final word on this is that there are clearly no real positive points for the animals involved in milk production, of us consuming it.  Yes.  Cheese is good.  (Awesome, really.)  And yogurt is a kid-favorite.  And everyone wants cream in their coffee these days.
But the next time you order extra cheese on that pizza, think of the baby cows that were taken from their mothers so you could have it.

I encourage everyone to do the research for themselves, because I assure you, this is not a post trying to show only one side of an issue.  This post just states the facts.  I assure you, there are not two versions of the truth...even when you wish there were.  (I didn't want to find out that they did this to baby cows.  I love cheese...!!)

So now I'm off of milk completely (previous blog post was about my opinion of the most popular non-dairy milks), and have been trying out different non-dairy cheeses.  When I find one I like, I'll write a post of the ones I've tried, and my opinion of them.

I'm not trying to demonize anyone, or "judge" anyone.  I'm just trying to point out something that is not common knowledge.  It's hidden quite well, isn't it?  And no one tells you that the milk mustache on that super-hot celeb should be on the super cute baby cow that it belonged to.
**Also, for those that will no doubt claim that a cow's udder would explode if not milked, I challenge that.  If cows were not fed food that increased their milk supply, and were allowed to naturally wean their calves, their udders wouldn't grow to such intense size, and they wouldn't NEED to be milked at all.  Yes, once given the sex hormones they use in the US on their dairy cows, that cow depends on that farmer to milk her. Because she was altered from her natural state.  But if left alone, if she was allowed to live the life she deserves to live, there would be no need for milking machines.

The problem is the consumption.  They do this because the people want it.  Someone forgot to tell the public that first, they are not baby cows.  And second, they should be weaning from their human mother, and that's it...not moving from mother's milk to milk from another species.

Here's a video (happy ending) that you might enjoy.

Posted by ChewyMomma at 4:17 PM