Why I Hate Sleep 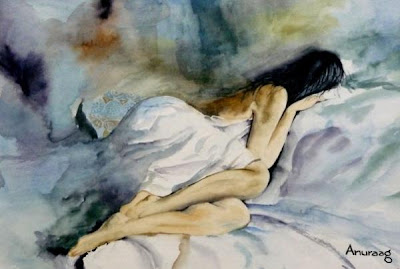 I used to be a sleeper.  I hadn't slept for so many years before I met my husband, I think I was making up for it.  I don't even remember really dreaming...but before I got pregnant with my twins, I'll admit (since anyone who knows me in real life already know!), I used to smoke my fair share of pot.  As soon as I took my first round of fertility treatments, I stopped cold-turkey, determined that my children would get a mom that was completely present.  A lot of my own childhood was one I wouldn't wish on anyone, and being clean and sober was part of making sure that wouldn't be re-played with my own children.  (I haven't touched anything stronger than an Ultra-Strength Tylenol in over 4 years.  I have strong views on the childhood my own kids will get, and there's nothing in this world that would ever sway me from it.)

So as I was saying, I used to sleep.  Then I had the twins.
When they were born, we had to leave them behind in the NICU and go home without them.  I couldn't sleep.  How could I?!  I was terrified that if I slept, something would happen to them...that if it wasn't for my hourly phone calls to the hospital, their fate would be sealed...and not in a good way.
I never slept more than an hour at a time during the 6 weeks they were in the NICU without me.  Then, I moved into the "Care By Parent" unit of the NICU with them for the last 16 days.
It didn't take long for me to figure out that the 5 or so hours of broken sleep I was getting at home was a WALK IN THE PARK compared to the 3 hours of sleep I was getting in the hospital!
(The only difference was that in the hospital, with the babies right next to me in their cots, hooked to monitors, I could get that 3 hours of sleep all in a row...which is more time than I'd slept in one stretch than I had in a LONG time.)

When we took them home they were still on an every-three-hour feeding schedule, around the clock.  And, if you've never been on one, I'll explain to you that it means every 3 hours from the start of one feed, to the start of the next feed.  Even if it takes 45 mins. to feed the baby.  Even when there are two.  So, I'd feed one for 1/2 an hour to 45 mins., then put them back to bed.  I'd wake the next one, feed them for 1/2 an hour to 45 mins., and put them back to bed.  Then I'd pump (for the first 4 months), or make up the next bottle for my daughter (after 4 months), before going back to bed for what ended up being roughly an hour.  Then I'd get up and do it all again.
They had this schedule for 6 months after they came home (until they were 8 1/2 months old).  My husband works shifts, and was working 14 hour days after they came home, so I was doing all the feeds myself.
In total, I would sleep 3 hours every 24 hours...in three 1-hour spurts.
Even after we were given the okay to let them sleep 4-5 hours between feeds, I was still up every hour on the hour, checking to make sure they were alive.  I couldn't help it.  I'd seen them both so close to dying so many times...

Anyways, they never slept through the night until they were 16 months old.  (And when they did "sleep through the night, it was for 6 hours.)  I'd learned to go on very little sleep, so when our 3rd child was born a month before the twins turned 2 1/2, I had no problem with the night-feedings.
I had no problems with her waking up at night, then having to get up early with the twins in the morning.  I don't mind not getting a ton of sleep...and I'll tell you why. 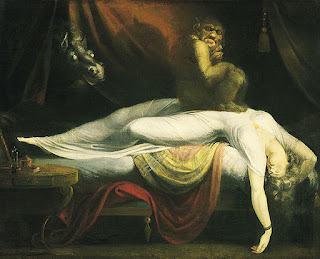 Since having kids, I'm having nightmares again. And not just a bad dream about being chased by a monster or whatever, it's always horrible dreams about something happening to one of the kids. I dream that someone steals one of them, or we lose one of them...and lately I've been dreaming about the baby. I've been having nightmares that she's falling down the basement stairs, that someone steals her, or that she disappears from a store, that she dies. Last night I dreamed that Children's Aid came and took her away to give her back to her real mom. And even though I know, logically, that I gave birth to her, there is still nothing more upsetting for me than imagining that for whatever reason, these kids wouldn't be here everyday when I wake up.

I don't know if it's because for the first time in years I'm really getting some real sleep, or if it's because of the insanity that has been our lives for the last couple of months is now settling down and my brain is still stuck in crisis mode, or what.  But I don't like it.  And it makes me hate sleeping.

For as long as I can remember I've had nightmares, and only waking up every couple of hours during the night, or not sleeping for any real stretch of time, can keep me from having them.  Only during those years that I smoked my body weight in pot everyday, could I sleep without worrying about having a horrible nightmare.

Even as a kid I remember having a nightmare about my mom killing my dad and brother, and telling me that she wouldn't kill me if I didn't tell...
I remember dreaming about "killers" sneaking into my house, and I had to hide my brother under the leaves in our backyard so they wouldn't find him...and there was nowhere for me to hide...
And that re-occurring nightmare about falling down basement stairs and seeing the shadow of a man at the top of the stairs...I'd wake up before hitting the bottom.  I had that dream EVERY. SINGLE. NIGHT. for years and years before it stopped suddenly.  (I'll get into that another day.)

I don't know.  I don't really get why I have the nightmares I have, but it's probably a mixture of stress and going to bed thinking about things that are best thought about during the daylight hours.  I think I need to also stay the heck off of the internet around bedtime and maybe stay off the Nancy Grace Facebook page all together.  (You'll see a disturbing trend on there if you look...)

Anyway, I'm going to get off of here and have a tea party with my little pants-less fireman, my "Christmas Dora", and the "Pink" princess.   LOL

Hopefully tonight will be different.
Posted by ChewyMomma at 1:41 PM