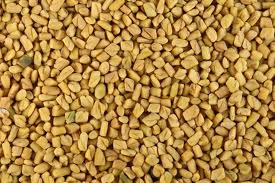 So I bought some fenugreek seeds at the grocery store.  I went online and found this on ehow.com:


And this, on Kellymom.com:

I'm  having some serious supply issues lately.  We've been through some extreme stress and sadness in our family over the past few months, and even taking four Domperidone a day, I'm barely making enough to make the baby happy, and she's only having about 4 very wet diapers a day, no matter how often I put her to breast.  (Before this, I took two pills, three days a week, and it was more than enough.)  I've had to start giving her water in a sippy cup after having her on the breast, because she's just not satisfied at all.  I know all too well that she needs to be on the boob as much as possible to increase my supply and I've tried that, but nothing is improving.  So for now she's getting boob throughout the day and during the night, and getting water when she needs it.  It's hard not to feel like I'm failing her.

Only because I am determined, because I know she deserves only the very best, I am trying something new.  I want to go to a MINIMUM of two years with her (and she just turned a year old on November 26th).  Ideally she could breastfeed as long as she'd like to, and she'd be closer to three or four before she stopped.  But at this rate, I'm afraid she won't make it to 18 months.

I've never used fenugreek seed, though I have tried that breast milk tea that has fenugreek in it.  (That tea didn't work for me, but it's probably because I couldn't get it in my mouth...my nose kept stopping me...that stuff smelled like ASS.)  I'm going out tomorrow to get myself a grinder so I can follow the instructions I saw on ehow.com, and we'll see how that goes.

This is what "Breastfeeding Online" has to say about it;

" Fenugreek seeds contain hormone precursors that increase milk supply. Scientists do not know for sure how this happens. Some believe it is possible because breasts are modified sweat glands, and fenugreek stimulates sweat production. It has been found that fenugreek can increase a nursing mother's milk supply within 24 to 72 hours after first taking the herb. Once an adequate level of milk production is reached, most women can discontinue the fenugreek and maintain the milk supply with adequate breast stimulation. Many women today take fenugreek in a pill form (ground seeds placed in capsules). The pills can be found at most vitamin and nutrition stores and at many supermarkets and natural foods stores. Fenugreek can also be taken in tea form, although tea is believed to be less potent than the pills and the tea comes with a bitter taste that can be hard to stomach. Fenugreek is not right for everyone. The herb has caused aggravated asthma symptoms in some women and has lowered blood glucose levels in some women with diabetes. "

And here's something interesting, it also says this;

Fenugreek has an age old reputation as a breast enlarger and contains diosgenin which is used to make synthetic estrogen and has been shown to promote the growth of breast cells. You can drink fenugreek as a tea, use it in yogurt, applesauce or soups, or make a light mixture with any lotion and massage it directly into the breasts. It may also aid in increasing sexual desire in women as well as increasing breast beauty and health. Fenugreek contains choline which may aid the thinking process, and antioxidants that slow aging and help prevent disease. It is also helpful in calming PMS and symptoms of menopause. Fenugreek is also considered to be an aphrodiasiac and rejuvenator."
This post is going to be a record of my experience with it.

Okay, so I put 1 1/2 tsp into a yogurt cup.  GROSSSSS!!!  I felt like I was on Fear Factor.  My BIL stood there and watched me take the first bite, and was for whatever reason, compelled to put his finger into what I had ground up, to taste it.
Oh man, I wish I'd had that on video!  Hahaha!  He spit into the sink, wiped his tongue on his sleeve, and got a drink of water.

Yeah, that shit is nasty.

So...I'm posting this HOPING some of you can give me some advice on how I'm supposed to take this when it tastes so gross.  Please comment on the wall under the link for this post.

Thank you in advance for any help!
xoxo
Posted by ChewyMomma at 12:03 AM