Every time I hear a mom talk about breastfeeding like it's all roses and sunbeams, I have to laugh.  I wish she was right, I wish it was always just "soooo lovely", but it's not.  Sometimes there are things that happen that have have had me describe it as torture, or worse yet, "bodily disfigurement"
The most funny part of all of this is that when I breastfed my son (he's 3 1/2 now), things really were (mostly) rainbows and butterflies.  It was just easy.  Well, easiER.  He was about 12 weeks old before he was exclusively being breastfed, so maybe it was those 12 weeks of pumping that really made my boob appreciate not being stretched to unimaginable lengths.  (Haven't used a hospital-grade pump?  Put that on your bucket list. There's really nothing that will make you get that HOLY HELL! look on your face faster.)
I'll admit that I still haven't had the moment of memory removal happen...not to get off topic here, but I'm pretty sure that there is a point that every mom's memory wipes clean any bad memories that EVER happened during their child's life...which is why, when their children have their own kids, moms can look their children in the eye and say "you never did anything like that...you were SOOOOO good!"  Even though we know it's NOT true because WE can still remember it.  (All kids come with some kind of issue, at some point.  It's part of BEING a kid!)

Anyways, back to where I'm going with this.  I haven't forgotten yet, all of those days that I breastfed my son through gritted teeth because the feeling was just annoying.  I wish I had a better word for it, but I don't know if there is one.  It irritated me.  Not the snuggling.  Not the touching.  Just the nursing.  And I know I'm not alone.  I've read it from other moms too.  Maybe my monthly was coming up, or whatever.  Who cares.  The fact remains that there were times that just the feeling of him nursing made me agitated.  And I kept going because one day of being uncomfortable was not enough to stop me.  I was a woman on a mission.

But other than those few times of feeling like I'd have happily torn my boob off just so he could nurse and I wouldn't have to feel it, it was peaches and icecream.  (LOL, can you tell I haven't had coffee yet...what's with the crazy comparisons?!)  I never had any real problems with him...nothing like this time around.  I took Domperidone like it was candy, but meh...had do do what I had to do.  When I stopped breastfeeding him, that was a TERRIBLE day.  I felt like shit.  HE didn't care...but I did.  I realized that it was all that I knew too, and there were tears (mine).  (That's a story for another day.)
So when I had my baby 14 months ago (she's 14 months now!), I felt like the winner of a race because she was born healthy, and was on my boob within a few minutes of being born.  She nursed.  She slept.  She nursed.  She slept.  Good stuff...right?

After going into it feeling like things would be perfect, I didn't watch to make sure she was nursing correctly.  I didn't CARE, I just assumed that because she was happy, all was well in the world.

They had TOLD me right after she was born that she had a mild tounge-tie, and I laughed in the face of it.  HAHAHA!  My son is severely tounge-tied, and I managed 22 months.  A mild tounge-tie wasn't going to stop me!  BRING IT ON!

It was about a week after we came home from the hospital that my boobs nipples, started to HURT.

A LOT.
They didn't crack...but they bled. Ugh. (WTF?! I'm a freakin expert!!)  I ended up having to switch boobs for each feed, depending on that stupid boob of mine to do what it had to do...which at first it seemed to.  (But they drink very little at first, right?)
After I finally got the pain and bleeding under control, I saw what had happened.  I drew you a picture to show you what I'm talking about. 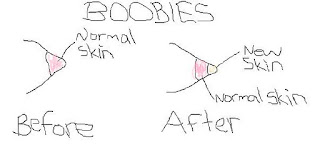 She sucked the skin off the entire end of my nipple!  GAH!!!

Yeah.  Well it's been many months since the original injury, and it still looks like it did right after it happened.  Not raw, but still...disfigured.  The normal skin is thicker, and so it's raised up a bit from the "new skin".  It looks weird.  Like there's a step from the end of my nipple to the top of it.

Good times.
I have to say, when I hear moms complain about "cracked nipples", I have made that pffttt! noise.  I want to say "Cracked nipples?  You want to see damaged nipples?  I'll show you damaged nipples!"
But I don't.  It's not helpful.  And if someone had of said something like that to me when my boobs were bleeding, I'd probably have karate chopped them in the neck!  (And I'm pretty sure I'd have gotten away with it too!!)  Daily I have to remind myself that in that moment the only thing that will help that mom is some encouragement.  And maybe some empathy.  Because, in reality, it's those painful moments that a mom just needs someone to get her through...and the response she gets could make or break that breastfeeding relationship.

I would never want to be responsible for a baby missing out on breastmilk.  I'm pretty sure a huge boob would drop out of the sky and squash me.  You know.  Like it was sent from the Breast Goddess, or something.

So that's my story of nipple trauma.  Lovely, eh?

Oh.  And before I say goodbye, it turns out my Baby Piranha has a severe lip tie.  No one told me about it.  It wasn't until I saw a photo posted on my wall by...Peaceful Parenting?  (I can't remember now.)  So I checked my kids.
Big Boy doesn't have one....just a severe tongue-tie.
Ooey Gooey DOES have one, plus a tongue-tie (more severe than the baby's).  Which really explains a lot!
And Baby Piranha (which she will now be known as), has a severe lip tie, and a mild tongue tie.
Amazing how easily things are explained with a few facts.
Posted by ChewyMomma at 12:05 PM