Being A Parent Is Hard Work! 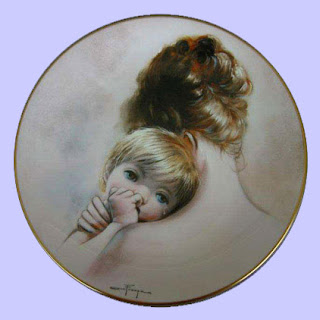 Growing up I was told to "never have children".  It was probably not the best thing that someone should have said to their own CHILD, but whatever.  That's not the point.  The point is, as much as it was inappropriate to dump that information on a child who then felt that they were not really appreciated, as an adult, I get it.  I wasn't told that because I was a mistake (though I surely was an accident), I was told that because parenting is SO very different than it looks on tv...or when you see people walking down the street with their children.  It's hard, and you have to give up a lot...sometimes all...of yourself, to be the person you NEED to be for them.  They deserve the best, and it's up to us as the adults to make sure they get it.  Sometimes it's pretty easy, but sometimes...sometimes it rips you apart.

I love my kids.  I cannot even tell you a word to describe how much I love them.  It's like when they were born, a piece of me just disappeared, and it was replaced with a piece of them.  They are the reason I laugh, the reason I smile.  And sometimes, they are the reason I cry.  Sometimes it's a bit overwhelming to know that I am responsible for not only their lives, but for every part of who they become as they grow into adults.

I'm responsible for their physical, mental, and emotional well-being.  As a parent, I've had to learn more about vaccines and disease than I'd ever had learned if I never had kids.  It's my job and my responsibility to know everything there is to know about them.  My children's lives are at stake!  I've spent about 2 1/2 years keeping up on the latest information, and re-reading things I've looked at in the past, just so I can know exactly what I'm talking about.  When it comes to my kids, I don't get to make excuses.  I need to know--so I do.

I've had to learn about circumcision.  Something I never ever thought about before having kids.  I had only seen one intact penis in my life before I had kids, and it was when I was about three years old at the time.  (The boy was about a year old, and his mom was changing his diaper at a family event.)  At least, I don't THINK I've seen one since.  (Though I'm not really sure...they look pretty similar when they're erect.  And I've never had much experience with a flaccid penis, so I wouldn't know.  Sorry if that was TMI.)  When it came to my own son, I had to know the facts.  I had to know what it was that my husband wanted done to our son.  And now, three years later, I know more about penises than I do about my own female anatomy.  Strange, I know.  At the time it was only the mother in me that couldn't allow my son to be hurt anymore.  Now that I know more, it's clear that the mother instinct to protect my young was exactly what was needed in that moment.  I'm thankful I listened.

Since having kids I've had to learn about gentle parenting.  Not because I wanted to, but because my children's emotional health depended on it.  I was spanked.  I remember being afraid of my parents...and sometimes that fear ended in me getting spanked for doing what I THOUGHT they wanted me to do.  I spent a lot of time feeling like I couldn't do anything right.
I promised myself that when I had kids, they'd never feel that way.  I didn't ever want my kids to be afraid of me.  I'm proud to say, they most definitely are not afraid of myself or my husband.  I will say, though, that coming from a generation of children that were openly "swatted" in public, readily spanked, and threatened all the time, the "peaceful parenting" thing was pretty alien to me.  I knew I wanted a better way to do things than were done to myself and my brother, but I didn't really know how to go about it.  When I stumbled upon Peaceful Parenting, I will FULLY admit, I thought it was a load of crap.  It took me a long time to really read the posts and realize that they are jam packed with links to show that these "opinions" are more than that.  They are facts.  I'm thankful that I realized that before my children ever had to experience life the way I did.  They were still quite small when I saw the light.  I'll be forever grateful to Guggie for posting the links on her Facebook wall...which always oddly seemed to be exactly what I needed at that moment.  She showed me the way, without ever really doing more than making information available.  (Lots of love to you momma.  You can find her blog HERE.)

But really, out of everything, the thing I've found the hardest about parenting is figuring out what it is that I need to know...before it's too late.  That 20/20 hindsight thing is just great, and I mean that in the most sarcastic way.  I hate finding out facts about something when there's nothing I can do to change things.  For example, I only learned about milk banks, and the information about the ingredients of formula AFTER my daughter had been on her prescription preemie formula for 7 months.  When I found out, I took her off of formula, and put her on 3% goat's milk.  But that doesn't change the fact that for 7 months, she was on formula.  She could have been getting some wonderful mother's milk, and getting the nutrients designed for human infants.

I allowed my children to be vaccinated at 2, 4, and 8 months old.  They also had 5 months of RSV shots paid for by the Canadian government because of their gestational age and weights when they were born.  Despite the fact that in my gut, I knew that there was something wrong with vaccinating the kids at 2 months, when they'd been born 2 1/2 months early, I let it happen.  Then, at four months (when they should only have been 1 1/2 months old), I let it happen again...and again when they should have only been 5 1/2 months old.  Every month during their first winter, they got that RSV shot as well.  I tried to time it so it was as far from the other shots as possible...but I let it happen.  Our doctor, the nurses in the NICU, and the nurse at the Dr's office all told me that the kids would get sick and die if they weren't vaccinated.  I let fear make my choices, instead of facts.

Having children has taught me that fear can sometimes override common sense.

After I started researching, the kids never got another vaccination.  When you know better, you do better.  Right?

Something else I have been lucky enough to learn about is ERF (extended rear-facing).  Our twins were rear-facing until about 18 months.  I didn't keep them rear facing as long as I would have liked to, but again, it was before I knew better.  Our new baby will be RF for a minimum of 2 years.

When I was told that being a parent was hard, I thought people were talking about the lack of sleep, or the  messes, or driving them around to different things.  Boy, was I wrong!  Although parenting is somewhat physically hard on us, it is so much more emotionally hard on us.  Looking at my children I am brought to tears thinking of what would happen to me if something was to happen to one of them.  They are my world.  My light.  And I waited so long for them.  That is why I spend so much time online, reading, researching, learning.  They deserve the best, and I NEED to know how to make sure they're getting it.

The baby has never had a vaccination, and will benefit from my research.  She will never have to worry about being injected with chemicals that would be illegal to put in juice and sell on the front yard.  (If it's not safe to DRINK, why is it safe to inject it directly into their bodies?!)

She will never have to worry that her little head will tear away from her spinal cord in a car accident because she was turned forward-facing at the minimum requirements.  (We didn't do that with the twins, either, but she'll stay rear-facing until a MINIMUM of 2 years.)

She will have the benefit of sleeping in our bed until she's too big to fit in there with us.  And after that, she will sleep in our room in her own bed until she's old enough to share a room with the twins.

She has had the benefit of BLW, eating at her own pace, not on the schedule of other people.  (She was a week less than 7 months old before getting her first solids, though she was trying to swipe our food at 4 months.)

She will never have to endure the trauma of forced weaning.  When she's done, she's done.  It's up to her.  I will never push her to stop, like I had to do with her brother.  (I was 2 months pregnant with her when her brother was encouraged to wean...she was a high-risk, no sex pregnancy.)  My job is to provide her with every opportunity for great health and happiness, not push her off the boob because people that don't know the facts tell me that she's "old enough to stop now".  To them I say, why do you care?  She's not on your boob, she's on mine.  And she's happy, healthy, and growing like a weed.  If you can point out how any of those things are bad, be my guest.  Since I'm pretty sure you can't, back off.

Also, our baby girl is now, after 10 months, being cloth diapered.  I didn't use them with the twins, though I did buy them.  (I sold them for super cheap, thinking I'd never use them, and knowing how expensive the damned things are to buy in the store.  I was trying to help people out by giving them a good deal.)  Now I'm up to my elbows in cloth diapers, and I love them.  I didn't think the day would EVER come that I could say that, because I thought the *extra* laundry would be enough to push me right over the edge.  LOL  Well, I've accepted the fact that I will NEVER get ahead on laundry, no matter how hard I try, so I might as well save some money, keep some diapers out of the landfill, and keep those chemicals off my baby's bottom.

I found that being a parent has also taught me that love can override fear.  We do what we have to do.  We pick up our pieces and we move forward, because we can't let fear run our lives.  When we let love take the lead, we magically find our common sense again.  Amazing how that works.

I'm sure that I'm never ever going to stop learning, and as things change, we'll adapt.  We'll do what we know is best for our kids, and let love help us keep our common sense in check.  We won't let fear make our choices, and I think we'll all be okay.  Parenting isn't easy.  But when I think about it, no one ever said it would be.

Now, if you'll excuse me, there's a tea party waiting for me.

Posted by ChewyMomma at 2:02 PM