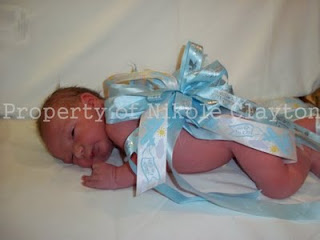 From the time I found out I was pregnant I had planned on breastfeeding, though no one around me thought it was a good idea. My mother-in-law, and three sister-in-laws kept telling me through my entire pregnancy that I would change my mind and that formula was just as good, as mad as it made me I just ignored them. My husband was supportive yet somewhat uncomfortable with the idea of it(its just a man thing i think). During my pregnancy many people got me formula and coupons for it as well, it almost seemed as though they wanted me to fail, but I was determined. On December 13th 2010 at 1:22pm I had a beautiful 8lb 10oz, 20 3/4in baby boy, Adam.

The hospital I was at very much encourages breastfeeding, and all of the nurses were very helpful. But for some reason Adam just wasn't able to latch properly. It was very discouraging. I almost gave up, there were about eight people in our room when Adam started crying, he was hungry, and I tried once again to get him to nurse, and he just couldn't, so I pushed the button and asked for formula. The nurse brought a little bottle and he sucked it down quicker than I could imagine, and sitting there in that room with me were all of those people looking at me and telling me, "You see formula is just easier" and "I told you you'd change your mind", it was heart breaking. 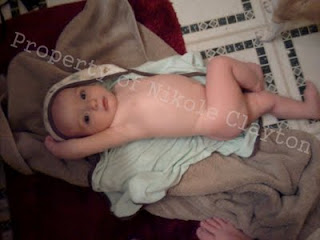 Everyone left and that evening I tried to nurse Adam again, he wouldn't take to it, and I a nurse came in to check on us. She asked how it was going and I told her awful, that i wanted to give up, when my husband stepped in and told me "your not giving up, your going to do this. Forget what my family says, you want to do this, and I know you can!"

That was the best feeling ever to know that he supported me. The nurse tried to help me get Adam latched on, and it just wasn't right. We discovered that I had flat nipples(I know, how could i not know? But its not like I was really comparing mine to others) She suggested a nipple shield, its a silicone cover that goes over your nipple, you moisten it and it suctions to your body, and as the baby sucks on the shield it pulls your nipple out and the baby feeds through the shield. So my husband goes to the store in search of this. He comes back with it, and not three minutes later, I'm nursing my son for the first time, and i must say its one of my proudest moments. 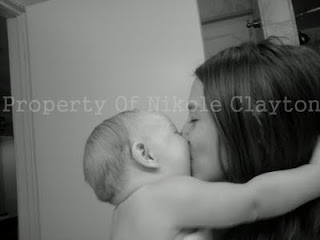 For the next three months Adam needed to use the nipple shield when he ate. It was a hassle but breastfeeding is worth it. I don't know how I would have gotten through those months if it weren't for my friend Angie. She lives in MD and I live in LA, but she really helped me through every time I felt like giving up. When Adam was about 3 months old I went to a La Leche meeting while I was visiting family in MD, I talked to the consultant about the problem that I had and she gave me a few tips. So that night I tried and after a little work, Adam latched on without the shield, and though he only ate for just a moment without it it gave me hope that he could learn. So for the next three weeks I would try to start the feeding without the shield and then when he refused to eat without it I would put it on. Gradually he would eat without it for a minute more, and two then four. And finally one evening he went through the entire feeding without it. After that I only used the shield at night(we co sleep and I just allow him to latch on and I would fall back asleep) after about two weeks of only using it at night he started refusing the shield all together and we haven't looked back!
Adam is now eight months old and still nursing. My husbands family doesn't like it, they think he is to old but I am planning on nursing for as long as he wants.
Breastfeeding creates a bond that is those who haven't done it wouldn't understand and those who have cant explain. Any problem you encounter with breastfeeding, can be fixed, all you have to do is find the right person to help you through it.
__________________________________________________________________________________
I want to thank Nikole for sharing her story here.  You're a fantastic momma, and your son is as lucky to have you for his mommy as you are to have him as your son.  xoxo
Posted by ChewyMomma at 9:18 PM