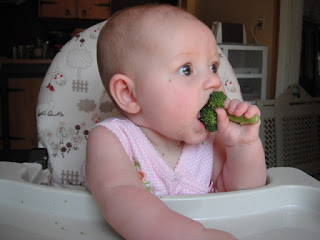 It has come to my attention that everyone is being told different things when it comes to starting babies on solid foods.  We're told not to give babies any milk until a year old, yet are told it's okay to give them ice cream and yogurt at 5 months old?!  I'm confused...are ice cream and yogurt not milk-based?!  Forgive me if I'm wrong, but that just doesn't seem logical to me.  Before a year old, babies don't NEED cow's milk.  (Honestly, I don't think the EVER need it, especially when there are naturally lactose-free options out there like goat's milk, which you can buy in 3% for the fats.)  Anyways, here's a rundown of what the major medical associations have to say about starting solids.

We started our twins on solid foods at 8 1/2 months, because they were born 2 1/2 months early, and developmentally, their bellies were only 6 months old at that time.  With our third child, we are doing BLW (Baby Led Weaning), and allowing her to eat what she can pick up and feed herself.  She HAS gotten some infant cereal, but only what she was able to scoop out of the bowl, and into her own mouth.  She got her first taste of solid foods at 6 1/2 months, and was able to pick up a piece of broccoli herself and put it in her own mouth.  (That's her with her broccoli at the top of the post.)  Since then she has mastered peas and carrots, watermelon, corn on the cob (okay, so she isn't a "master" at corn yet, but she sure is trying!), and loves cut up banana and blueberries.  I've found that if it's in a suction cup bowl, she can pretty much scoop anything into her mouth.  But, like I did with the twins, I'm not rushing "real" food (ie. the meals we're eating).  I prefer to give them a few months of nothing but fruits and veggies...my twins are three, and still choose fresh fruit and veggies over other snacks!  Peas, carrots, and corn were some of their first "treats", so they still ask for them today.
Our children will eat what we give them, and learn to love whatever it is.  So we've made sure that the foods they love are healthy, and give us the most "bang for our buck".  Nutrition is an important thing to teach them, and it's easiest if it's done from the first time they ever have solids.  I'm sure that everyone has great intentions when they feed their babies ice cream...at least I like to believe that.  But in the end it's not nutritional, it's full of sugar, and it's a dairy product that they shouldn't get until a minimum of a year old.  My twins didn't get anything like that at all until they turned two.  We wanted them to start out their lives learning to love what was good for them.  Even now, at three, the twins get ice cream MAYBE three or four times a year.  I'm happy to make them frozen yogurt, which is a much better alternative!


"Breast milk is the best food you can offer your new baby. The Canadian Paediatric Society recommends exclusive breastfeeding for the first 6 months of life. At 6 months, your baby will be ready for other foods (see Feeding your baby in the first year). You can continue to breastfeed until your child is 2 years of age and beyond."


Introducing solid foods
At 6 months, most babies cannot get everything they need from breast milk or formula alone. Though you can continue to breastfeed until your baby is 2 years and beyond, at 6 months you’ll start to introduce your baby to other foods. Your baby is ready to start other foods when he:

When can you introduce solid foods to your baby?

Babies are ready for solid foods after six months. At that age, they can handle more textures and their digestive system is ready for new foods. They are usually physically able to sit up, eat from a spoon and show interest in solid food.

Is it okay to introduce solids to my baby before 6 months?

Before six months babies don’t need solid foods as breast milk (or formula) provides all the nutrients that babies need. Six months is a good time to start solid foods because that is when babies need more nutrients, like iron, that solid foods provide in addition to breast milk or formula.
From: Eat Right Ontario
Formula-fed babies who start eating solid foods before they are four months old may be more likely to become obese than those who start later, a new study suggests.
See the whole article HERE.

"Recently, there have been changes to the age
of introduction of solids for infants.  It is
now recommended that healthy, full term
infants are exclusively breastfed for the first
six months of life because breast milk is the
best food for your baby.  Health
professionals used to recommend that
infants could start solids between four and
six months of age."
This is from Public Health Nutritionists/Dietitians in Ontario.
"Pediatricians and parents should be aware that exclusive breastfeeding is sufficient to support optimal growth and development for approximately the first 6 months of life."


"Health Canada and the Canadian Pediatric
Association recommends starting solids at 6 months
of age. Research has shown that feeding solids too
early does not help your baby sleep through the
night, and may lead to food allergies. By 6 months
your baby’s immune system is ready to handle other
foods."  Copied from HERE.
"It is well recognized that the period from birth to two years of age is the “critical window” for the promotion of good growth, health, and behavioral development. Therefore, optimal infant and young child feeding is crucial during this period. Optimal infant and young child feeding means that mothers are empowered to initiate breastfeeding within one hour of birth, breastfeed exclusively for the first six months and continue to breastfeed for two years or more, together with nutritionally adequate, safe, age appropriate, responsive complementary feeding starting at six months."
According to UNICEF.
"Breast milk is the best and only food or drink your baby needs for the first six months of life. After six months, gradually introduce solid foods -- and continue to breastfeed for two years or more."
From:  Health Canada

You can find more links, and a great post about all of this at Kellymom.com. So I think now it's clear that despite being told several different things, we see that in the end, a baby's belly is not ready to digest solid foods before 6 months, and introducing them sooner than that is a great way to cause allergies in the long run.  I honestly think all too often a tired mom gives her infant solid foods, or adds cereal to their bottle in the hopes of getting just a couple extra hours of sleep.  It's dangerous, and babies are designed to wake up every few hours to feed.  It ensures that they get the calories that they need for the rapid growth in the first few months, and it keeps them from going into too deep a sleep...which could prevent SIDS.
Your baby will spend it's entire life eating solid foods.  I know it's fun, and I know it's cute, but we only get ONE chance to do this right.  We only get ONE chance to give them the very best start in life, and that's not done by rushing solids.  Please, give your baby's digestive system the chance to grow and mature before you start giving them ANY types of solids.
Posted by ChewyMomma at 5:28 PM