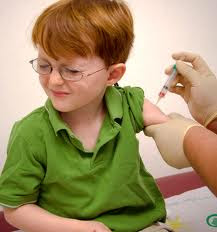 North American children are now the most vaccinated on earth. Since 1980, Canadian vaccine schedules have more than doubled the types of vaccines given; for the first 4-6 yrs of life alone, Public Health now recommends 46-47 doses of thirteen different vaccines. The first 8 doses are given in three or four shots at two months.

It’s been declared that today’s children are the first generation whose parents will outlive them. Today, 10% of Canadian children have life threatening afflictions. In the last 25 years, concurrent with vaccine increase, there have been huge declines in children’s health in many categories:

In contrast, Chicago-based Homefirst Medical Clinic, run by a group of doctors including medical director Mayer Eisenstein MD,JD,MPH, have no known autism and super-scarce allergies in their children, most of whom have had no vaccinations. Two studies done in New Zealand in 1992 and 1995 show that the unvaccinated children clearly have less allergies, less otitis (ear infections), less tonsillitis, less running noses, less epilepsies and less ADHD.

For the first time in history…children are sicker than the generation before them. They’re not just a little worse off, they are precipitously worse off, physically, emotionally, educationally and developmentally.

- Judy Converse, MPH, RD, LD; Why Do Pediatricians Deny The Obvious?, 2006
Vaccinations may cause significantly more injuries and deaths than they prevent.
The medical establishment considers vaccines effective if they suppress a few targeted illnesses – but at what expense? An emerging body of evidence indicates that vaccines can damage a child’s developing immune system and brain, leading to life-threatening or debilitating disorders like autism, ADHD, asthma, peanut allergy, juvenile diabetes, etc or to SIDS, death itself. If this is true, the number of vaccine-related deaths per year outnumbers deaths from so-called “vaccine-preventable” illnesses.

Historical trends show that deaths caused by illnesses targeted by vaccines had already declined by as much as 98% before mass vaccination programs for them began. Statistical tampering and incomplete and selective reporting over the last sixty years has made vaccination appear more effective than it truly is. For instance, the seemingly dramatic decline in polio cases after introduction of polio vaccine coincided with a change in diagnostic criteria from paralysis lasting 24 hrs or more to paralysis lasting at least 60 days. Polio incidence actually increased after vaccine was introduced; the oral polio vaccine became the sole cause of paralytic polio in North America until it was discontinued here.

Infectious diseases can be made worse by fever-suppressing drugs and antibiotics. Fever is part of the immune process; if it is stifled, infections that would otherwise be merely inconvenient can become dangerous, even deadly. Routine use of fever suppressants during illness and after vaccination is inadvisable.

Antibiotics increase the number of bacterial toxins released into the body by killing other bacteria not targeted. Some also diminish Vitamin C, thereby inhibiting the immune system.

Vaccine injuries are drastically under reported. Although there is a government system in place for reporting vaccine reactions and injuries, most incidents go unreported. Doctors, who naturally do not want to admit to participating in a practice that injures a child, often choose to deny or disregard even the most obvious connection between a sudden health issue and vaccination. As a result, it is believed that fewer than 10% of vaccine injuries are actually reported; it’s impossible to know exactly how many children are injured each year.

Vaccines damage the immune system. A healthy immune system has two main parts, Th1 and Th2. Th1 leads with the first and most important immune response, to sense and eliminate incoming disease-associated organisms and particles. Th2 then creates antibodies and a memory of the disease. Babies are born with immature immune systems in which Th2 dominates. As their immune systems mature, dominance switches permanently to Th1. Usually, infectious agents enter the body through the nose and mouth, triggering Th1 which normally combats them effectively. But vaccines injected into the body bypass Th1 and over-stimulate Th2. This confuses the normal maturation and skews the functioning of the immune system; Th2 becomes dominant and the crucial Th1, suppressed. The result can be autoimmune disease (eg juvenile diabetes), allergic disorders (eg eczema, asthma and life threatening anaphylactic allergies to everyday foods like peanuts) and frequent infections (eg colds and ear infections).

Vaccine ingredients are risky. They include dangerous preservatives and adjuvants (chemicals which increase immune response) and other potentially harmful substances: aluminum phosphate, phenol (carbolic acid), MSG, formaldehyde, gelatin, etc. The flu shot still contains mercury. This and other toxins can accumulate and eventually suppress the immune system, cause brain damage, and lead to a myriad of health issues and developmental disorders. Exposure to toxins during the critical stages of development before age two is especially dangerous to the brain.

Some vaccines are made using tissue cultures: monkey kidney, foetal calf blood, chick embryos, aborted human foetal lung, yeast, etc. It’s impossible to remove all contaminating viruses and proteins left from this process. Injected contaminants can create immune problems including anaphylaxis. Other vaccines have genetically engineered or artificially fragmented active ingredients. These could result in injuries as yet unrecognized.

Vaccine safety has never been proven. Studies to compare the overall long-term health of vaccinated versus unvaccinated people have never been done, nor have studies to discover the combined and cumulative effects of so many vaccines. Safety studies prior to vaccine licensing are typically inadequate and limit follow-up to a few days or weeks.

Vaccinations are given indiscriminately. There are no tests to determine which children are likely to respond adversely to vaccinations. Little concern is given to innate health and family health history. Underweight babies are routinely given the same dosage using the same schedule as babies of normal weight. Unlike other drugs, vaccines are administered using a one-size-fits-all policy.

The wholistic approach treats the body with care.
Immunity is and can be acquired naturally. A foetus receives antibodies acquired by its mother from infections she’s previously had. After birth, breastfeeding provides multiple immune factors and optimum nutrition to the baby’s body and brain. Breastfeeding is so exquisitely refined that it continually changes and adapts to the baby’s needs as they change.

Immunity derived from exposure to infections can last a lifetime. Any immunity provided by a vaccine wanes over time and puts the child at risk of a more dangerous infection later in life. Infections contracted in childhood encourage optimal balance of Th1 and Th2 and may actually accelerate development and learning.

A healthy lifestyle continues the immunity established by breastfeeding. Excellent nutrition, avoidance of toxins of all kinds, sufficient rest, and being part of a loving family all contribute to freedom from disease of any kind.

The very young (babies and small children) are at high risk because their brains are undergoing the most rapid development at the very time they receive the greatest number of vaccinations…they receive many inoculations (up to 9 inoculations) in one office visit. This is insane and in my estimation, criminal.

- Russell L Blaylock, MD, CCN; How Vaccines Can Damage Your Brain, 2008
Vaccination is based on fear.
Vaccination ignores our evolutionary history. We have survived in co-habitation with multitudes of germs. There’s a balance between immune enhancement and immune depletion. We can encourage the former by acknowledging the power and competence of our bodies to heal themselves.

Those administering vaccines rarely, if ever, provide full information on the vaccines being injected; they exaggerate risks of infection and don’t explain that vaccines may be just as risky or worse.

Vaccinations are NOT mandatory in Canada. “Unlike some countries, immunization is not mandatory in Canada; it cannot be made mandatory because of the Canadian Constitution. Three provinces require proof of immunization for school entrance: Ontario and New Brunswick for diphtheria, tetanus, polio, measles, mumps, and rubella immunization; Manitoba for measles. But, exceptions are permitted on medical or religious grounds and reasons of conscience; legislation and regulations must not be interpreted to imply compulsory immunization.” (Immunization in Canada; May, 1997; Vol 23S4)

Note that Ontario and New Brunswick exemption forms are available.