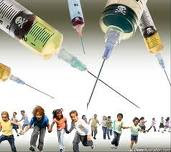 You know, there are a lot of people who like to argue with me about vaccine safety. I too was raised to believe that vaccines saved the world. Until I had my own children...suddenly I had to research it further...and I was terrified. The truth is so far from what I was told.
Since then I've had the chance to talk to many many un-vaxxing parents, all of which are amazing and loving parents. We have all dug into more research on vaccines and disease than ANY un-vaxxing parent I know. It seems to me that the more you know, the less safe vaccines become. Suddenly the wool is pulled OFF your eyes and you can see just how dangerous they are.
I trust Doctors to HEAL...and some are fantastic and do a wonderful job. The ones in the offices who see 60 people a day, all in less than 4 mins., and who barely look at you...I trust them as far as I can throw them. THOSE Doctors are in it for the money. They would rather vaccinate your child to prevent diseases that are preventable, curable, or non-existent in the Western Hemisphere. The vaccines are dangerous, and your Dr. cannot be held liable if something goes terribly wrong after your child gets a vaccination...not that they'd EVER admit guilt anyways!!!

Below are links to various bits of information sent to me by Rick Neubrander. (Published with permission.)

Please take a few minutes to look up some of these things and EDUCATE BEFORE YOU VACCINATE.

The there is the study that after 35 years of vaccinating with the flu shot that mortality rates did not change. The media and CDC would have us believe this vax saves of from 36,000 deaths each year.
http://archinte.ama-assn.org/cgi/content/abstract/165/3/265

We attribute the decline in influenza-related mortality among people aged 65 to 74 years in the decade after the 1968 pandemic to the acquisition of immunity to the emerging A(H3N2) virus. We could not correlate increasing vaccination coverage after 1980 with declining mortality rates in any age group. Because fewer than 10% of all winter deaths were attributable to influenza in any season, we conclude that observational studies substantially overestimate vaccination benefit
Or this information from the Cochrane Group
http://www.ncbi.nlm.nih.gov/pubmed/15266445

Influenza vaccines are effective in reducing serologically confirmed cases of influenza. However, they are not as effective in reducing cases of clinical influenza and number of working days lost. Universal immunisation of healthy adults is not supported by the results of this review
If you think that you are protecting infants from pertussis by having the vaccine, it has been shown that the vaccine does not stop the spreading of pertussis.
http://www.cdc.gov/ncidod/eid/vol6no5/pdf/srugo.pdf

We found that immunity does not even persist into early childhood in some cases. We also observed that DPT vaccine does not fully protect children against the level of clinical disease defined by WHO. Our results indicate that children ages 5-6 years and possibly younger, ages 2-3 years, play a role as silent reservoirs in the transmission of pertussis in the community
http://pediatrics.aappublications.org/cgi/content/extract/104/6/1381
All pertussis vaccines tend to modify duration and severity of disease rather than completely preventing illness.
Even the CDC tells us that the vax does not stop transmission, but the media and all the scaremongering like what happened in California leads you to believe the unvaxed are the only way this is transmitted.
http://www.cdc.gov/ncidod/eid/vol6no5/srugo.htm

The whole-cell vaccine for pertussis is protective only against clinical disease, not against infection (15-17). Therefore, even young, recently vaccinated children may serve as reservoirs and potential transmitters of infection.
But did not vaccines save us from smallpox? This is an interesting article on the subject.
http://www.vaccinationcouncil.org/2010/02/26/smallpox-vaccine-origins-of-vaccine-madness

Hopefully this will cause you to look at the various vaccines yourself. Making an educated choice is better than making a choice by trusting that "Pharma" and the government are looking out for your best interests. Did you ever wonder why they will not do a study of vax vs unvaxed? Did you ever wonder why they have never tested administering multiple vaccines in a single visit yet "Know" it is safe?
Chronic disease is up dramatically since the 80's. Because the Autism community is very vocal and the only things studied have been MMR and Mercury, yet the parents still cry out for a vax vs unvaxed and no studies to date have been done. I... decided to look outside of autism and see if there are other things that mysteriously arose at the same time as autism. The results disturb me but mainstream medicine seems to think it does not matter. I say we traded acute disease for chronic disease.
Can Vaccines induce chronic illness? Let's look at several chronic diseases. Diabetes, Asthma, Allergies, Arthritis, Chronic Fatigue.
Diabetes
http://www.ncbi.nlm.nih.gov/pubmed/12453886?dopt=Abstract

Stable in numbers from 1920-1950 then a steady rise from mid century on
http://tinyurl.com/6qev89
From 1985-1996 we get this conclusion "Incidence of insulin dependent diabetes in children aged under 5 years has risen markedly in the Oxford region over the past decade. The cause of the increase is unknown, but environmental influences encountered before birth or in early postnatal life are likely to be responsible"
When did the mass increase in vaccination begin? Why did diabetes start to increase in the same timeframe as autism?
http://tinyurl.com/4dotu35 - HIB Vaccine - Pay attention to the last statement in the conclusion.

The current data shows that vaccines are much more dangerous than the public is lead to believe and adequate testing has never been performed even in healthy subjects to indicate that there is an overall improvement in health from immunization. The current practice of vaccinating diabetics as well as their close family members is a very risky practice
http://www.vaccines.net/9TOEJ.pdf

There is a statistically significant correlation between the prevalence of obesity and the number of vaccine doses recommended. A similar trend exists for hypertension, type 2 diabetes and metabolic syndrome. The data presented and prior publications indicates vaccine induce an immune spectrum disorder
http://www.ncbi.nlm.nih.gov/pubmed/12021127 BCG Vaccine

It is concluded that BCG vaccination has an immunomodulatory role in these diseases.
http://www.ncbi.nlm.nih.gov/pubmed/9020406
Animal studies have demonstrated the timing and content of human vaccines can affect the development of diabetes. Clinical trials of new human vaccines are not designed and generally not powered to detect an effect of immunization on the development of IDDM. These animal toxicology studies indicate that the effect of vaccines on human insulin dependent diabetes needs to be examined.
http://www.ncbi.nlm.nih.gov/pubmed/14679101

We conclude that HIB vaccination may have an unspecific stimulatory polyclonal effect increasing the production of GADA and IA-2A. This might be of importance under circumstances when the beta cell-related immune response is activated by other mechanisms.See More
Asthma
http://www.ncbi.nlm.nih.gov/pubmed/18086216
In the unvaccinated group, there were no significant associations between pertussis infection and atopic disorders. In the vaccinated group, all associations between pertussis infection and a...topic disorders were positive, the associations with asthma [odds ratio (OR) = 2.24, 95% confidence interval (CI(95%)): 1.36-3.70], hay fever (OR = 2.35, CI(95%): 1.46-3.77) and food allergy (OR = 2.68, CI(95%): 1.48-4.85) being significant. There was a positive association between pertussis infection and atopic disorders in the pertussis vaccinated group only. From the present study, it cannot be concluded whether this association is causal or due to reverse causation.
http://www.pubmedcentral.nih.gov/articlerender.fcgi?artid=1060465
RESULTS: A significant (p = 0.0024) increase in the prevalence of asthma could be observed among 5th grade children in all three communities studied between 1980 and 1989. At the same time a significant (p = 0.0172) rise in the prevalence of wheezing accompanied by shortness of breath could be observed. A similar trend could not be found for the prevalence of bronchitis and other respiratory conditions among the studied children. PFT (FEV1, FEV1/FVC) of children suffering from asthma or from wheeze accompanied by shortness of breath were lower than those of healthy children. Changes in the prevalence of background variables over time could not explain the significant rise in the prevalence of asthma among the children.

CONCLUSIONS: The significant rise in asthma and related respiratory conditions coupled with reduced PFT observed in this study suggest that the increase over time in the prevalence of asthma is a true increase in morbidity and not due to reporting bias. The increased prevalence of asthma could be observed in all the communities studied and does not seem to be connected with the operation of the power plant.
Note: The above rise is from 1980-1989, same as diabetes, same as autism. Coincidence?
http://www.ncbi.nlm.nih.gov/pubmed/18207561 DTaP
Delay in diphtheria, pertussis, tetanus vaccination is associated with a reduced risk of childhood asthma
http://www.ncbi.nlm.nih.gov/pubmed/6335351 HIB

The 23 children who received no diphtheria/pertussis/tetanus (DPT) and polio immunizations had no recorded asthma episodes or consultations for asthma or other allergic illness before age 10 years; in the immunized children, 23.1% had asthma episodes, 22.5% asthma consultations, and 30.0% consultations for other allergic illness. Similar differences were observed at ages 5 and 16 years. These findings do not appear to be due to differential use of health services (although this possibility cannot be excluded) or con-founding by ethnicity, socioeconomic status, parental atopy, or parental smoking
http://www.ncbi.nlm.nih.gov/pubmed/2889487

The preventive effects of aminophylline and clemastine (50 microns . kg-1, i.v.) were observed. B. pertussis not only alters adrenergic function but provocation in B. pertussis-sensitized guinea-pigs seems to be a good model for bronchial asthma.
http://www.ncbi.nlm.nih.gov/pubmed/10714532

DTP or tetanus vaccination appears to increase the risk of allergies and related respiratory symptoms in children and adolescents
http://www.ncbi.nlm.nih.gov/pubmed/15805992