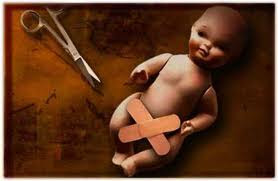 I'm sure we've all heard our fair share of bullshit when it comes to why circumcision "should" be performed on infants. I'm going to bust the top off the can of crap and tell you the myths, and give you the facts. I'm not trying to judge anyone who circumcised their son(s) based on misinformation. What I'm doing is making sure that it doesn't happen again. Sometimes a little bit of information goes a long way.

This is by far the most annoying excuse for male genital mutilation that I have ever heard in my life, and it makes me so angry. The truth is, no one is going to ask your husband and your son to drop their pants in order to determine their relationship status.  "Oh, they match. Must be father and son." Uh, yeah. Not likely. My son has red hair and brown eyes. My husband has blonde hair and blue eyes. Should I dye my son's hair and pluck out his eyes and give him blue glass eyes so he can "look like his father"? How is it any different than cutting off the end of his penis for the same reason? Both would be removing perfectly normal, functional parts of the body in order to make a boy "look like" his daddy.

If your husband is so concerned with your son's penis looking like his own, you have to ask yourself two things...first, why is he so threatened by his son's penis? Babies are born with foreskin to protect the sensitive glans (head) of his penis. If your husband is circumcised, I have to wonder if perhaps he's afraid that he may find out that his own penis is in fact, missing something. Does it threaten his manhood to realize that??

Secondly, you have to ask yourself if your husband may be trying to find a way to deal with his own mutilation...to do this to his son would be showing the world that he is okay, that it wasn't that bad, and that it didn't emotionally scar him. but THEN you have to ask yourself why he would feel the need to do this to his son if he was not emotionally scarred by it? It seems to me that a man who does this to his son does it because he feels that he has to. It hides his pain of being "fixed", because clearly he was not born perfect if that was done to "correct" what was not perfect about him. It's sad that they not only do this to infants, but almost immediately after birth...as though the boy has something so shamefully wrong with him that it needs to be corrected before anyone else is subjected to it.

The fact is that fathers and sons share DNA. Isn't that enough? Do they also have to share the scar of ignorance for the rest of their lives?

Do you have access to water? That's all you need to clean it. It's a mucus membrane and does not even require soap. Simply clean what's seen on your infant...wipe it like a finger. When the foreskin is retractable, it's just a matter of pulling the skin back (which should only be done by the person who owns the penis), giving it a quick wipe with a wet cloth and you're off to the races. It takes less time than washing your hands after you use the restroom... and you certainly wouldn't cut your hands off in order to save yourself from having to spend that time cleaning them, right?

More information of how to care for an intact penis can be found here.


And the fact is that the foreskin is there to protect. It protects the glans of the penis from many things...one of those is from the feces and urine in your child's diaper, which burns their freshly peeled penis. If you've heard the screams of a newly circumcised boy, you cannot deny that their urine and feces cause them enormous pain. It hurts them every time you have to peel the diaper away from their penis. I have heard the shrieks they make when their diapers are changed and it's not a normal cry. It's the most horrible sound I've ever heard. Don't let anyone tell you to retract it. It will detach itself from the glans over time. Often children retract it themselves, and who better to do it than the person who owns it?!

Myth #3: "It will need to be removed later in life"


I've heard a lot of nonsense lately about men who, late in life, find themselves with reoccurring infections. Which makes me wonder...how is it that he can blame his foreskin for these infections?? Honestly, if a grown man cannot wash his own penis, he has bigger problems than I can deal with. Maybe instead of just being circumcised and removing the foreskin, he should cut his entire penis off. That'd prevent any more infections for sure. Seems to me if he needs some lessons on hygiene.

Removing a functional piece of the body to "prevent" things that may or may not ever happen, is just plain crazy. We do not remove a baby girl's breast buds to "prevent" breast cancer later in life. We do not cut off the toes to prevent a possible infection caused by ingrown nails. Anyone with common sense would say that either of those things would be ridiculous. But we routinely cut off the end of a baby boy's penis to "prevent" things...things that are VERY unlikely to even occur!

Also, if he decides to be circumcised as an adult there will be two MAJOR differences. One being that the choice would be HIS. An adult is put to sleep for the procedure, and given powerful pain meds to deal with the post op. pain. As an adult, he would know what to expect, and would be able to consent to this. None of these things are done for our baby boys.

The second major difference is that as an adult, there is no need to rip the foreskin from the glans of the penis. It will have already come apart on it's own over time.

Myth #4: "When he's old, he will get infections because of his foreskin not being cleaned properly in a nursing home."


I have read comments online about how baby boys should be circumcised because when they're old and living in a nursing home, the nurses don't retract their foreskin to clean under it, and they are subjected to numerous infections. This however, is not a circumcision issue. This is a health care issue. My own mother was a nurse for years, and often told me stories of retracting a resident's foreskin and finding that no one else had done that in what looked like EVER. So although SOME nurses do fail to properly care for their patients, not all do. And when this generation of boys are rocking out in the old folks home, they'll almost all be in good company. As it is now, many older gentlemen are not intact. It was such a common misconception in their day that a large number were circumcised. But now things are looking up. Canada's statistic for boys left intact in 2009 was 90.8% (according to the Canadian Institute for Health Information). In the US, according to the CDC, 67.5% of boys remained intact in 2009. The nurses that will be caring for OUR sons will be responsible for caring for the MAJORITY who are still intact. They will be better equipped to care for an intact penis better than the ones today. And as I stated, it's a health CARE issue...if we make sure our family members are being properly taken care of, this will not be an issue.


No. It doesn't. An intact penis is a NORMAL penis. That is what they're supposed to look like. Only after years of misinformation have we come to see a cut, circumcised penis as normal. It is most certainly not normal. Considering the fact that we don't know what we're missing when we've never had it, I assure you that after a sexual encounter with an intact man, you will see the difference for yourself and soon come to LOVE the look of an intact penis.
I have another thought on this. When a mother tells me that SHE prefers the look of a circumcised penis, it takes me aback. Why would a mother want her son's penis to look the way she prefers her sexual partner's penis to look?! Creepy, isn't it? How about you step away from his penis and let him decide for himself how he wants his penis to look...unless of course you plan on having sex with your son... See?! Creepy!


No it doesn't. Studies have shown that there is more likely hood of a man contracting HIV if he is circumcised, due to the fact that the chafing that occurs can cause tiny tears along the shaft of the penis. An intact penis does not have this happen, as it is protected by the sheath of skin, and it prevents chafing. The ONLY two things that can PREVENT the transmission of HIV is the regular use of condoms, or just not having sex at all. (That last one is a SURE FIRE WAY of preventing it! LOL!) The truth is that the US has the highest number of circumcised men in the world. They also have the highest HIV rate. What does that tell you? It tells me that the proof is in the pudding.


As I stated above, in Canada, close to 91% of male babies were left intact in 2009. Your son will NOT be the minority in the change room. I'm not sure exactly how much "penis peeking" is going on in there as it is, but even if your son is confronted by a cut peer, he has the ability to say that his parents never paid someone to cut off the end of his penis. His is all there.


If we removed tissue for fear of one day getting cancer, we'd be left with very little. The chances of getting penile cancer are 1 in 100,000. Not a very good reason to amputate a functioning body part. You have a much higher risk of getting lung cancer (1 in 13), breast cancer (1 in 7), prostate cancer (1 in 6), colon and rectum cancer (1 in 17). Do we remove lungs, breasts, prostates, colons or rectums at birth to prevent the cancers we are MUCH more likely to get? No. Because that would be crazy. Yet this is always one reason people state when they try to justify cutting their sons. This information can be found HERE.