Why I Lie To My Kids About Santa. 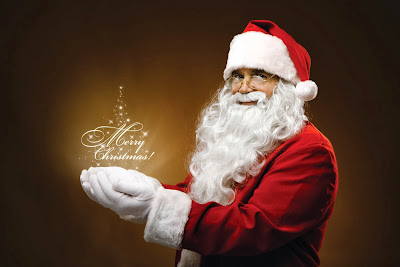 Our kids want to believe in Santa, so for them we do it. I don't think it's teaching kids to lie, like so many people are saying.
I think it's allowing them to have a few years of their lives that they don't HAVE to worry about how much money you have. Once they know that mom and/or dad are buying the presents, the lists change. It's no longer something that is a list of their most desired gifts. It's a list they think you can afford. That's why I agree to lie for them. I don't want my kids worrying about life yet. They're five (twins), and three. They have their whole lives to worry about things. For now I just want them to be little, and to feel nothing but magic and joy this time of year.

If you believe in Santa, he IS real to you.
I just think they're little for such a short time, and if they want to love Santa, why not let them?
If anything, what I am going to make sure my kids get out of this when they do find out Santa isn't real, is that the reason I didn't tell them was because I wanted them to be able to be happy with no boundaries.

I've heard a lot of people say they don't want to give Santa the credit because they "worked [their] ass off to pay for those presents".
I don't mind giving credit to a man that doesn't exist, because I don't need a pat on the back every time I do something good for my kids. The smiles on their faces is more than enough.

I also can't crush their belief in Santa because Santa doesn't walk alone. He has the Easter Bunny, and the Tooth Fairy with him. And Unicorns. And Fairies. And magical princesses. And mermaids. And dragons.
To take all of those away when they kids are so small and full of imagination would just be so sad.  I can't imagine being responsible for crushing my daughter's dream of becoming a princess when she grows up.  (She'll grow out of it and find a new dream, but for now being a princess is all she wants to do.)

I agree to go along with Santa for the same reason I agree to let them believe in unicorns.  Because it's not going to hurt them, and they like believing in them.