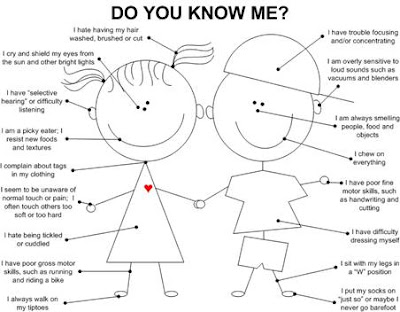 What is sensory processing disorder?

Who has sensory processing disorder?

and other developmental disabilities

Anyone else have a child with this?  I have two.  (The twins.)  It's made life interesting, that's for sure.  If you have a child who lives with this, you know EXACTLY what I'm talking about.

Our son's SPD seemed to improve dramatically when we took him off sugar, but it's still there.  Just under the surface, all the time.
Life needs to stay within certain lines for him to cope well.  It's why our morning and nighttime routines never falter.  He's able to do pretty much anything during the day as long as he knows what's coming.  He's not into surprises.  For him not to lose it completely, he needs a lot of notice of an event that is going to take place, and to be reminded of it daily.  On the way to do something, he will ask repeatedly what is going to happen.  He has to know the plan.

If a plan doesn't work out; if we tell him we're going somewhere, and for whatever reason we can't (for example, if the store is closed), all hell breaks loose.  We have to be very careful how we tell him what our plans are.  We make sure that we say, "We're going to TRY to go and..."  Then he knows that there's a chance that it may not happen, even if we are all counting on it.  Sometimes he still acts out even if he knew there was a chance of it not happening, but it's slightly less intense, and can from time to time be avoided completely.  *This is why I spend so much time making sure that stores are open/the park isn't locked/the exact times Santa is at the mall...and so on.*  It's easier to avoid a breakdown than to live through one.

We also cannot tell him that we're going to buy them (the kids) something unless we're standing in front of it and we can see that they can, without a doubt, get it.  (This could be anything from a mango, to a toy.)  Being told he can have something, and then to find it's impossible (they don't have any!), results in a meltdown.  He doesn't know how to handle it, and so he just doesn't.  What we say is going to happen HAS to happen.

What really grinds my gears is that there are people who see his behavior and assume he's "bad", or "spoiled", when in reality it's not at all.  He's SUCH a sweet and kind and wonderful boy, and if we say that we're just going to look at something (like toys), he doesn't freak out if he gets nothing.  Because it wasn't part of the plan anyway.  No biggie.  It hurts me to know that people judge my son, and me, for something he didn't choose to have.  Children with SPD look like everyone else, and there are no obvious markers for people to use to identify it.  I try not to glare back at the people who feel the need to glare at me in a moment when all I really need is an understanding smile (or nothing, you know?  If you can't manage a smile, just do NOTHING.  It's better than glaring at me...or my four year old son!).

The Boy is under-responsive to touch, under-responsive to movement, he has all but three of the sensory seeking behaviors, he has an emotional dysfunction...yet with all of this, it is still dramatically less than the list he had when he was still getting foods with sugar.  (There are entire lists now that he doesn't have any "checks" on, whereas before, every one would have been checked.)  Sugar absolutely aggravated his SPD, and caused his behaviors to be more extreme.

As for our Older Daughter, she is learning to live within it.  Slowly.
The type my daughter has is the same type I have.  I think of it as a sensitivity to certain things.  (Perhaps because I've lived with it, I don't find it all that "abnormal".)

It's something we noticed with her from the start, though we really thought it was just "preemie" behavior.  But it never went away.  With her, the world needs to be soft and quiet.  And it needs to smell good.  She is the first one to cover her ears, even in a place that no one else really notices the level of noise.  She hates wind.  A drop of water on her shirt sets her off into hysterics.  She's learned to live with the sound of a lawn mower, but used to scream to the point of her face turning purple if she heard one.  She'll avoid foods that every other person in this house likes, because it "smells bad".  (It doesn't smell BAD, it just HAS a smell.)

It isn't always easy with her because her reactions are immediate and can sometimes seem like they're just out of the blue, but like I said before, we share many of the same traits in what we can and cannot handle.  So I get it.  I can look over at her and know when something is making her anxious just by looking at the profile of her face, because it's making me anxious too and I can see her tense jaw and know exactly how she's feeling in that moment.  But, I have no doubt that she'll make it through life without most people ever even noticing it.  Unless someone is actually paying close attention, it's unlikely that they'll notice it.  She's one of the most amazing people I've ever met in my life, and I know that as time goes on she'll learn to adapt even better than she already has.  When someone does notice, it'll be someone who cares about her.  (Most people don't pay enough attention to anyone else to notice that they can't walk in tall grass.  Ever.  Or that they wear a sweater in summer because the breeze makes their skin feel crazy.)

I've found that people are more understanding with Older Daughter, maybe because her type of SPD works better for them.  I think they treat her more kindly because she's "so sensitive", and when she acts out it's because of something like rain, or noise.  The whole thing plays into their idea of her being a helpless, delicate, "poor little girl".  For some reason, the world around us seems to want to treat her like a victim in this, and at the exact same time treat her brother like he's a terror for having the exact same behaviors that are caused by the exact same disorder.  It boggles my mind.  I'm trying to raise her to be independent and strong and to not play OR BE a victim.  I'm trying to raise my son to be sensitive and kind and be proud of the person he is, in a world set on hating men.  So the whole thing just irks me beyond belief.
Way to label them based only on stereotypes, society.  You suck.


If you want to see if you or your child have any of the symptoms, find the checklist HERE.

Here is another, for infants and toddlers.

I know that when I was first pointed in the direction of this information a couple years ago, I finally felt like I wasn't losing my mind...I knew there had been something different about them, I just didn't know WHAT.  Knowing this made all the difference.  Which is why I shared it.